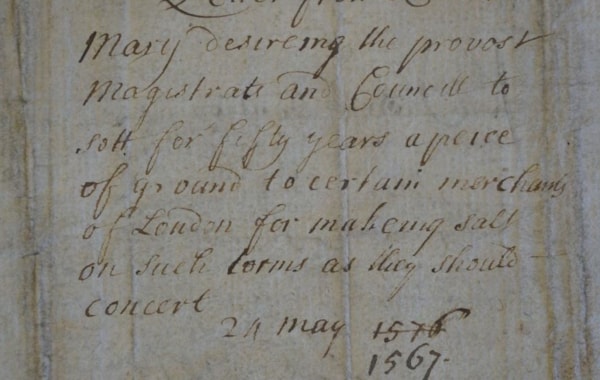 After decades spent unseen, a group of documents believed to have been signed by Mary Queen of Scots and relating to life in 16th-century Edinburgh have recently come to light at the Museum of Edinburgh.

After decades spent unseen, a group of documents believed to have been signed by Mary Queen of Scots and relating to life in 16th-century Edinburgh have recently come to light at the Museum of Edinburgh.

Although information about them was held on file having been gifted in 1920, they were lost in storage before being unearthed during recent inventory and conservation work by curators at the museum.
The beautifully handwritten documents, carefully dated, numbered and signed, relate to and provide a fascinating insight into the busy commercial life of Edinburgh during the 16th century. Papers covering markets and the selling of meat sit alongside permits for London salt sellers to operate in the City and for the building of a bulwark (defensive wall) at Leith.
The documents date from 1553 to 1567, and are signed variously by Mary, her then husband James Hepburn, 4th Earl of Bothwell, and James, Duke of Chastlerault.

As part of the inventory and conservation process, the documents have been taken out of frames they were displayed in many years ago, causing new information to come to light: two of the documents include watermarks in the paper which can only be seen when they are held up to the light. One features a goat, the other a hand holding a flower (the latter is on the main image above).
For now, the documents will remain in safe storage at the Museum of Edinburgh given their fragile state. Future plans are to have the documents assessed by a conservator and for further research to be done on them by experts on Mary’s reign, after which the hope is to exhibit them for residents and visitors to enjoy. Meanwhile, the new discovery can be viewed via Capital Collections.

Bridge to the past

Councillor Donald Wilson, Culture and Communities Convener at City of Edinburgh Council said: “Museum & Galleries Edinburgh hold thousands of historic treasures on behalf of the City and its visitors, many of which are on display in our venues. However, some items, such as these documents, are too fragile to be on long-term display, so putting them online is a great way to showcase them and tell their stories.”
Vicky Garrington, History Curator at Museum of Edinburgh added: “The documents provide us with an amazing bridge to the past. It’s incredible to think of Mary Queen of Scots reading through these documents before carefully applying her signature. We all know the story of Scotland’s queen, her eventful life and eventual execution, but in these documents, we see a different side to Mary. Here, she can be seen carefully managing the everyday affairs of Edinburgh and Scotland. These documents help us to better understand her reign”.

QUICK LINK: The ups and downs of Mary's life in Edinburgh