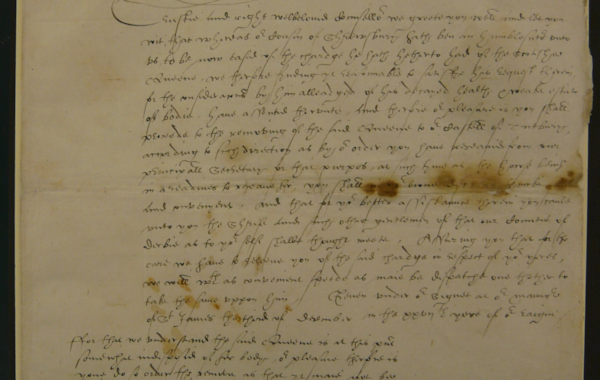 Letter from Elizabeth I to Ralph Sadler, 3 December 1584

Many of the letters were written to Sir Ralph Sadler, who was entrusted with the custody of Mary Queen of Scots, at Tutbury Castle in Staffordshire, between 1584-85, just a few years before her execution for treason in 1587.

They include four letters signed by Elizabeth I, and many others in the hands of her Chief Minister, Lord Burghley, and her Secretary of State, Sir Francis Walsingham.

The collection, which is of significant historical importance, has been on loan to the British Library for several years. The letters have been gifted by Mark Pigott KBE to the American Trust for the British Library and will enhance the Library’s extensive collections of original correspondence of the Tudor monarchs.

Roly Keating, chief executive of the British Library said, “The British Library is delighted to announce the gift of this important collection of letters, relating directly to one of the most dramatic episodes in English and Scottish history. The words of figures such as Elizabeth I, Burghley and Walsingham are a vital part of our shared heritage. The Library and all scholars and students of UK history are grateful to Mr. Pigott and to the American Trust for their vital ongoing support.”

Keating added, “Mark Pigott has generously supported the British Library and its collections for many years, including sponsorship of our magnificent PACCAR Gallery and exhibitions on our Royal Manuscripts collection and Henry VIII. He has also generously contributed to the enhancement of education and outreach programmes and we are very grateful for his continued commitment and friendship.”

Among the highlights of the collection are:

A unique window into history

Mark Pigott KBE said of his donation: “The British Library has provided luminescent insights into centuries of history through their collections and we are pleased to add to their superb repository of manuscripts. The Tudor period was an eventful time for the nation, politically and culturally, and these letters offer a unique window onto that world both for researchers today and for future generations.”

David Redden, President of the ATBL, added: “The American Trust for the British Library acknowledges with enormous gratitude the spectacular gift by Mark Pigott of the Sadler archive. The archive has been placed at once on deposit with the British Library where it will dramatically expand our insight into the world of the Tudors and the extraordinary story of Mary, Queen of Scots.”

The Library plans to digitise the letters next year, along with other Tudor documents, and they will be made available for all on the Digitised Manuscripts website.

MORE: The most hated prison of Mary Queen of Scots