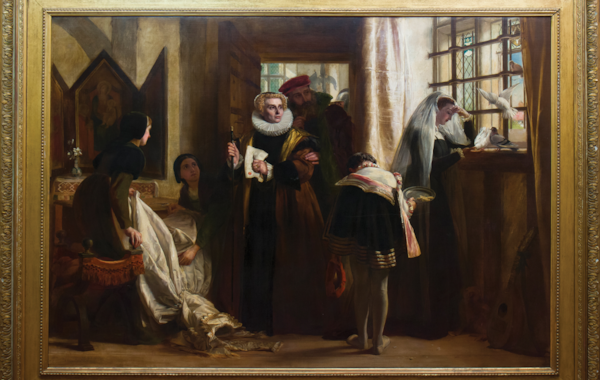 Mary Queen of Scots in Captivity by John Calcott Horlsey

John Calcott Horsley, who is credited with designing the world's first Christmas card (commissioned by Henry Cole), was born in London in 1817 and is best known for his historical scenes. When Mary Queen of Scots in Captivity was first exhibited at the Royal Academy in London in 1871, the following words accompanied it:

''Mary, at twenty-six years of age, was consigned to the charge of the Earl and Countess of Shrewsbury, and remained captive in their custody for nearly sixteen years. There was little love lost between the Countess and her loyal prisoner. The former, familiarly known as Bess of Hardwick, was a woman of strong character and imperious disposition.''

Mary is dressed in black at a mullioned window of her bedchamber where she has been held captive for many years. She is feeding doves that have flown to the open window from the world outside that she cannot return to. The contrast of their freedom and her captivity is made more pathetic by the entry into the scene of the cruel-faced Bess of Hardwick who clutches the warrant for Mary's execution which will finally release her from her captivity.

Her young page who has been holding a plate of bread from which she feeds the birds, hangs his head in grief and her hand-maidens are startled by Bess and the Earl of Shrewsbury's approach.The little dog at her feet and the religious triptych add to the symbolism, denoting fidelity and piety whilst the abandoned lute suggests the silence of lost romance.

For information on how to make a bid before the sale, during the auction or in person, visit McTear's Auctioneers website.