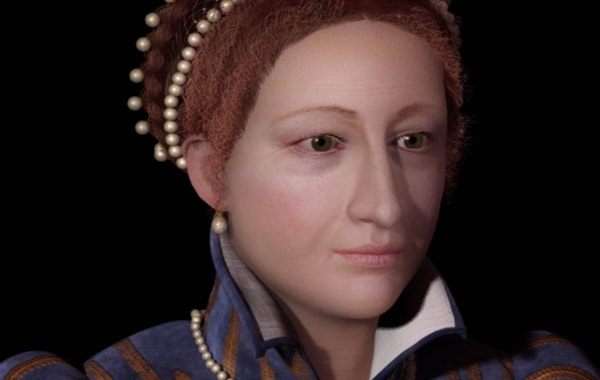 A new facial reconstruction showing how Mary Queen of Scots may have looked at the end of her reign has been released to mark the opening of a new exhibition on the life and legacy of the queen. ...

A new facial reconstruction showing how Mary Queen of Scots may have looked at the end of her reign has been released to mark the opening of a new exhibition on the life and legacy of the queen.

A team of experts led by Professor Caroline Wilkinson of the University of Dundee and Janice Aitken from Duncan of Jordanstone College of Art have pooled their expertise to produce the animated reconstruction, commissioned by National Museum of Scotland.Professor Wilkinson, a cranofacial identification expert, also worked on the facial reconstruction of King Richard II of England last year. Professor Caroline Wilkinson, from the Forensic and Medical Art Research Group, worked from existing portraits and from what is known of Mary’s biography to reconstruct her face as it would have been following during her reign in Scotland from the ages of 19 to 26, a period when there is no portrait record of Mary.

Professor Wilkinson created a head-and-neck model using the portraits of Mary as templates. The model was created using 3D modelling software and craniofacial templates before digital artist Janice Aitken sculpted clothing and hair then added textures and lighting to create the finished image.

She said: 'There were no portraits painted during Mary’s time in Scotland, but there were both before and after this period. Normally we would begin the process of craniofacial reconstruction by examining skeletal remains, but of course we didn’t have a skull to work from in this case so had to work from portraits earlier and later than the depiction we were asked to create.

'This meant it was a very different challenge for me and the model is more of an artistic representation rather than the scientific interpretation we would normally produce from skeletal remains. We had to get the facial proportions and size of her features from portraits which, luckily, were from slightly different angles so we could look at her face from more than one viewpoint.'