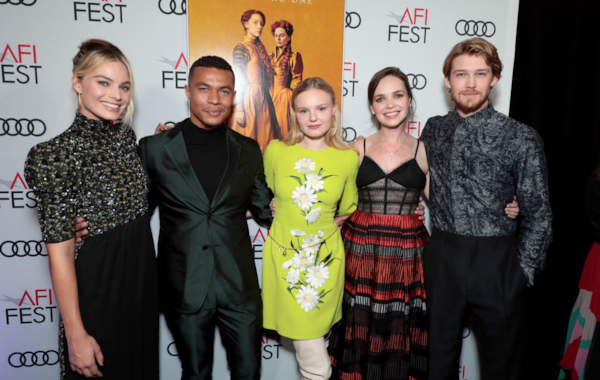 Among those walking the red carpet were film director Josie Rourke and Dr John Guy, whose books inspired the film. History Scotland interviewed both Josie and John before they flew to America for the premiere and you can read what they had to say about what it was like to work on the film in our new Mary Queen of Scots magazine.

The evening included appearances by Eileen O’Higgins, who plays Mary Beaton, Gemma Chan, who appears on screen as Bess of Hardwick, and Ismael Cruz Cordova – David Rizzio in the film. For a list of cast members, click here.

Mary Queen of Scots is Josie’s feature film debut and she brings a wealth of stage experience to the role of director, through her work as artistic director of London’s Donmar Warehouse. Among her credits are Les Liaisons Dangereuses (2015), The Vote (2015) and Privacy (2014).

We spoke to Josie about the challenges of bringing Mary's turbulent life to the silver screen, and asked her about her decision to portray Mary Queen of Scots and Elizabeth I in a face-to-face meeting. Read the interview in Mary Queen of Scots magazine.

Dr John Guy is a historian and biographer and has been a fellow of history at Clare College Cambridge since 2003. He is the author of My Heart is my Own: The Life of Mary Queen of Scots and Queen of Scots: The True Life of Mary Stuart, the two books that inspired the movie.

Mary Queen of Scots is due for US release on 7 December 2018 and will be screened in UK cinemas from 19 January 2019.

Dr Guy spoke to History Scotland about the biggest misconceptions about Mary's queenship, and how the film will affect the public's perception of Mary Queen of Scots. Read more in our souvenir magazine.

Explore the history behind the film with History Scotland’s souvenir magazine, published to mark the release of the film.

The magazine not only explores the story behind the movie but also looks at the real-life Mary and the challenging and dangerous situations with which she was faced during her reign and subsequent nineteen-year imprisonment.

Pre-order now and we'll post your copy of the limited edition guide when it's published in December.

*Please note, all History Scotland subscribers will receive this magazine with the January/February 2019 issue*