The best places to see Mary Queen of Scots paintings: around the UK and online History Scotland's new guide takes a look at the best places in the UK to see portraits of Mary Queen of Scots - as well as trusted online sources.

The life of Mary Queen of Scots has fascinated artists for centuries, and inspired literally thousands of portraits of the Stewart queen.

Read on for the best places to see portraits of Mary - both around the UK and online.

The painting The Head of Mary Queen of Scots After Decollation by Amos Cawood (1587) (shown on Art UK here) is on display in the Ante Room at Abbotsford House, where visitors can also see a Mary Queen of Scots deathmask – part of the ceiling decoration in the house’s library. The artist signature is Amias Cawood but it sometimes appears as Amos/Amyas.

Blair Castle in Perthshire holds a fine portrait of Mary and her son James VI, dated 1583. The painting is from the Duke of Atholl collection.

This museum of Scottish Catholic Heritage, in Aberdeen, has three important portraits of Mary Stewart: her full length memorial portrait, a painting commissioned by her son James VI and the Blairs Jewel which, it is claimed, was painted during Mary’s years in captivity.

This memorial portrait is a unique and world-famous work and has a fascinating history in that it was given to the Scots College in Paris by Elizabeth Curle, who was with Mary when she was executed and can be seen in the painting. 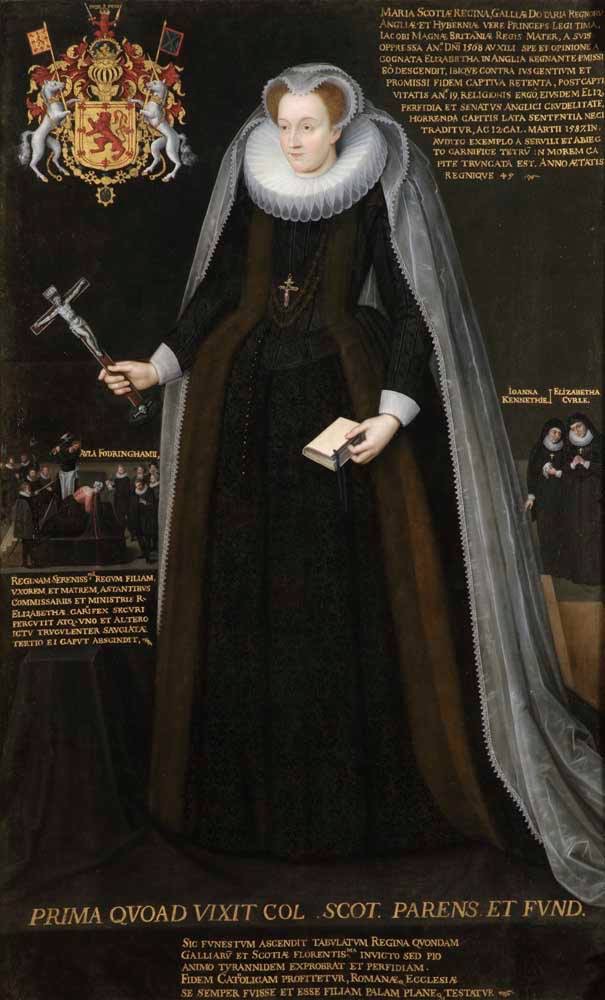 During the destruction of the College on the French Revolution the painting was smuggled out and eventually found its way to Blairs. The Royal Collection has a copy of this portrait.

The miniature (Blairs Jewel) may be the one which Elizabeth Curle owned and is one of only four original miniatures of Mary in the world. It was painted in secret from life while Mary was imprisoned and forms a reliquary. 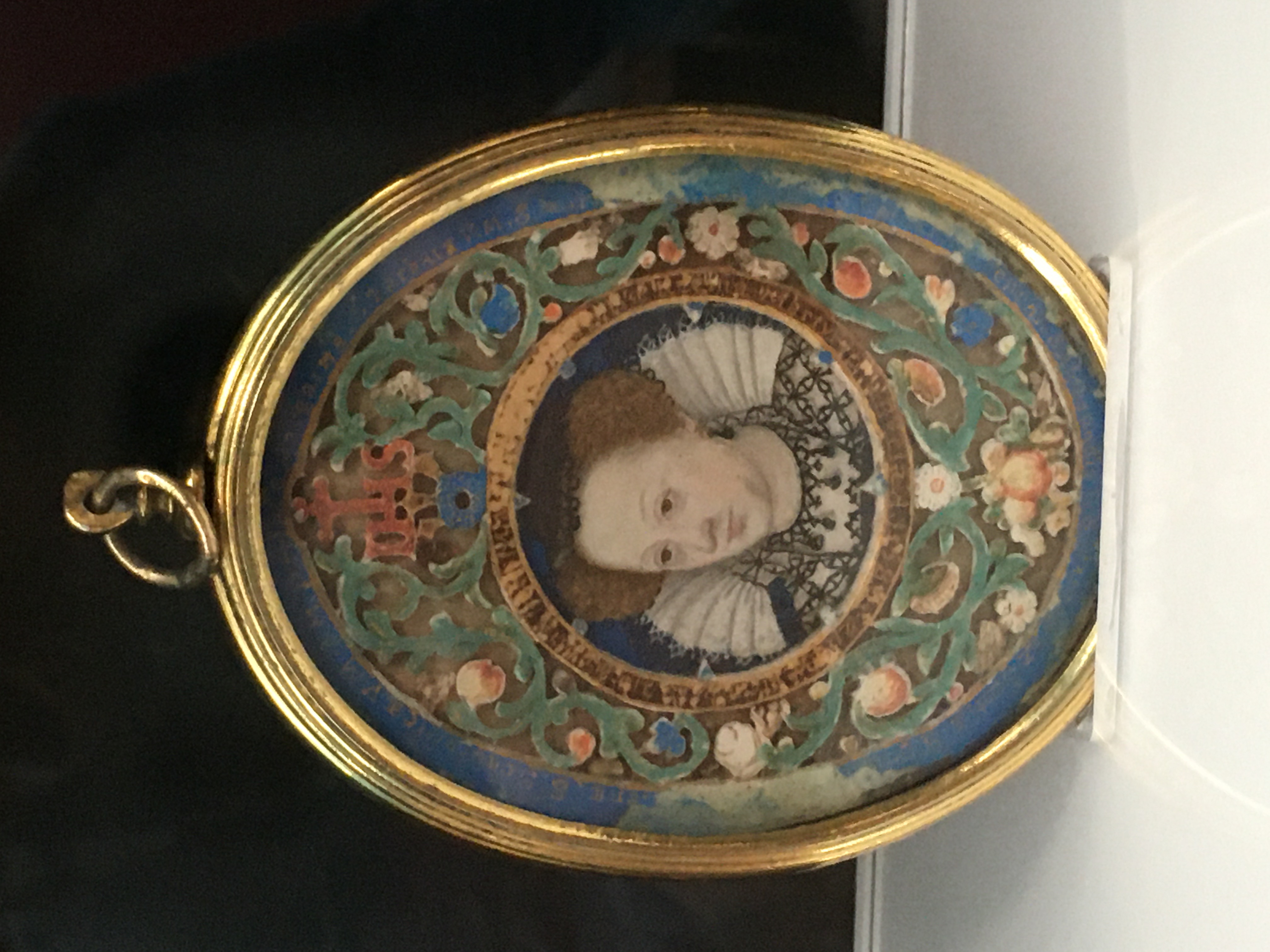 The portrait of young Mary is a unique work but very little is known of its history at present. 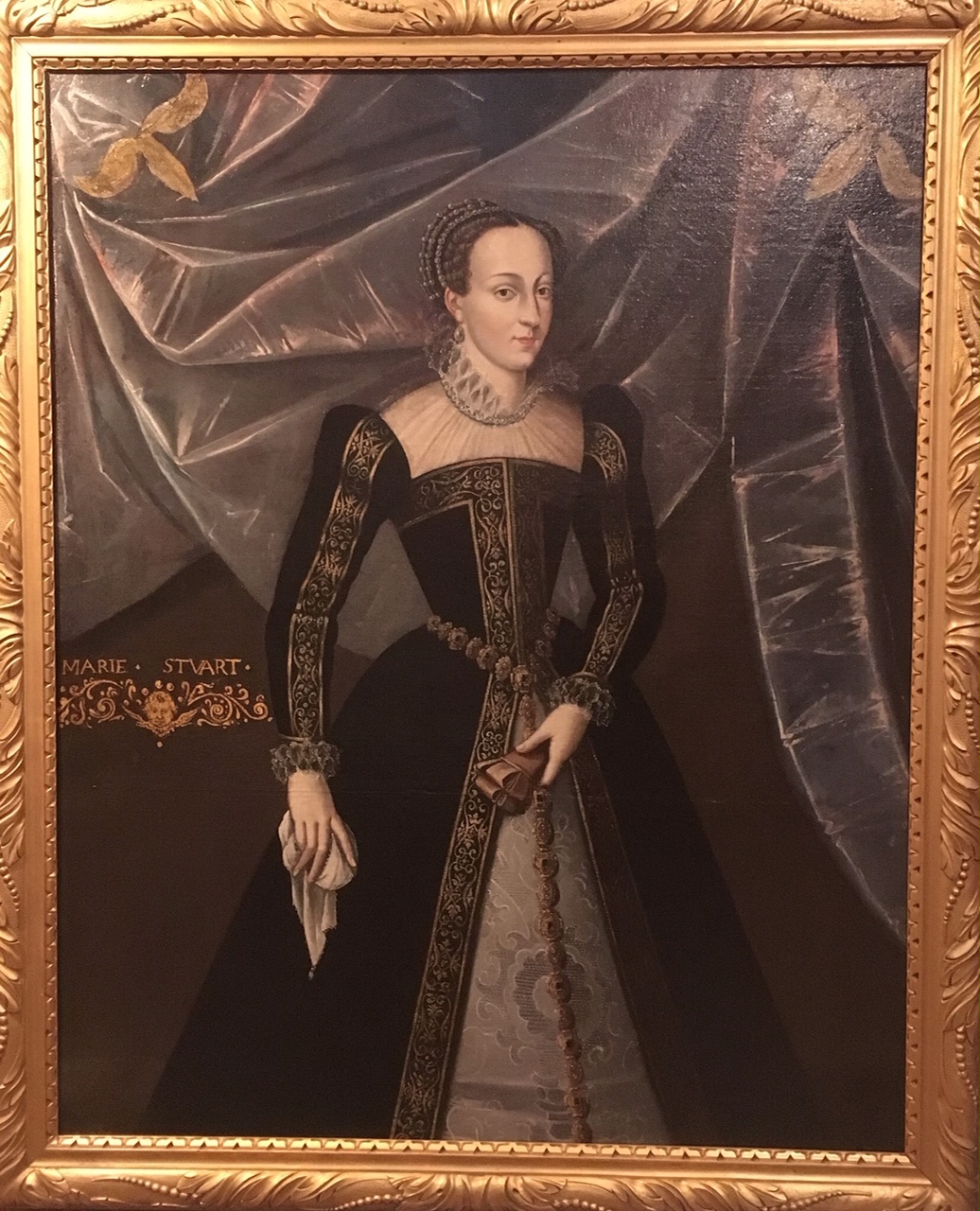 The ‘Orkney portrait’ of Mary Queen of Scots is on display at Dunrobin Castle in Sutherland. Dating to 1556, the painting shows a young Mary and was painted by an unknown artist.

The Mary Room in Edinburgh Castle tells the story of the Stewart queen’s royal line and her links to the castle, with paintings of Mary and key figures in her life. A cast of her bust from her tomb at Westminster Abbey is also on display, in the castle’s royal palace.

Falkland Palace was a favourite residence of the Stewart monarchs, and a place where the royal court spent much of its leisure time. The palace has strong links with Mary Queen of Scots and visitors can see one of Britain’s oldest original real tennis courts, where the queen enjoyed playing the sport.

The palace has an early 17th-century painting of Mary dressed in black with elaborate white lace ruffles and holding a crucifix and this is on permanent display in the drawing room. This is from the English School and is oil on panel.

Provenance: From the Bedingfeld collection, Oxburgh Hall. The painting is said to have been given to Lord Montagu of Cowdry Castle, one of the Peers who voted against Mary’s execution and brother of Lady Bedingfield. It was gifted to the National Trust for Scotland by the Hereditary Keepers of Falkland Palace.

The palace also has a print of a much later image of Mary in the Queen’s Room.

Hardwick Hall in Derbyshire is the home of a full-length portrait of Mary aged 36, during her time in captivity. Painted c.1578 and by or after Rowland Lockey, it shows the queen dressed in black, with rosary beads hanging from her gown.

Although there is no evidence that Mary spent any time at Hardwick Hall (since the house was not completed until after her execution in 1587) the property has connections to her story as it was the home of Bess of Hardwick, the wife of Mary’s jailer George Hardwick.

The painting is oil on panel and is one of a small number known as the ‘Sheffield portrait’, believed to have been painted whilst Mary was prisoner at either Sheffield Castle or Sheffield Manor. Find out more on the National Trust website here.

Hever Castle’s portrait was recently rediscovered in France, where it was unidentified and thought to date from the 17th century. However, dendrochronological examination of the oak panel on which the portrait is painted, revealed that it was created after 1547 (Mary was born in December 1542). 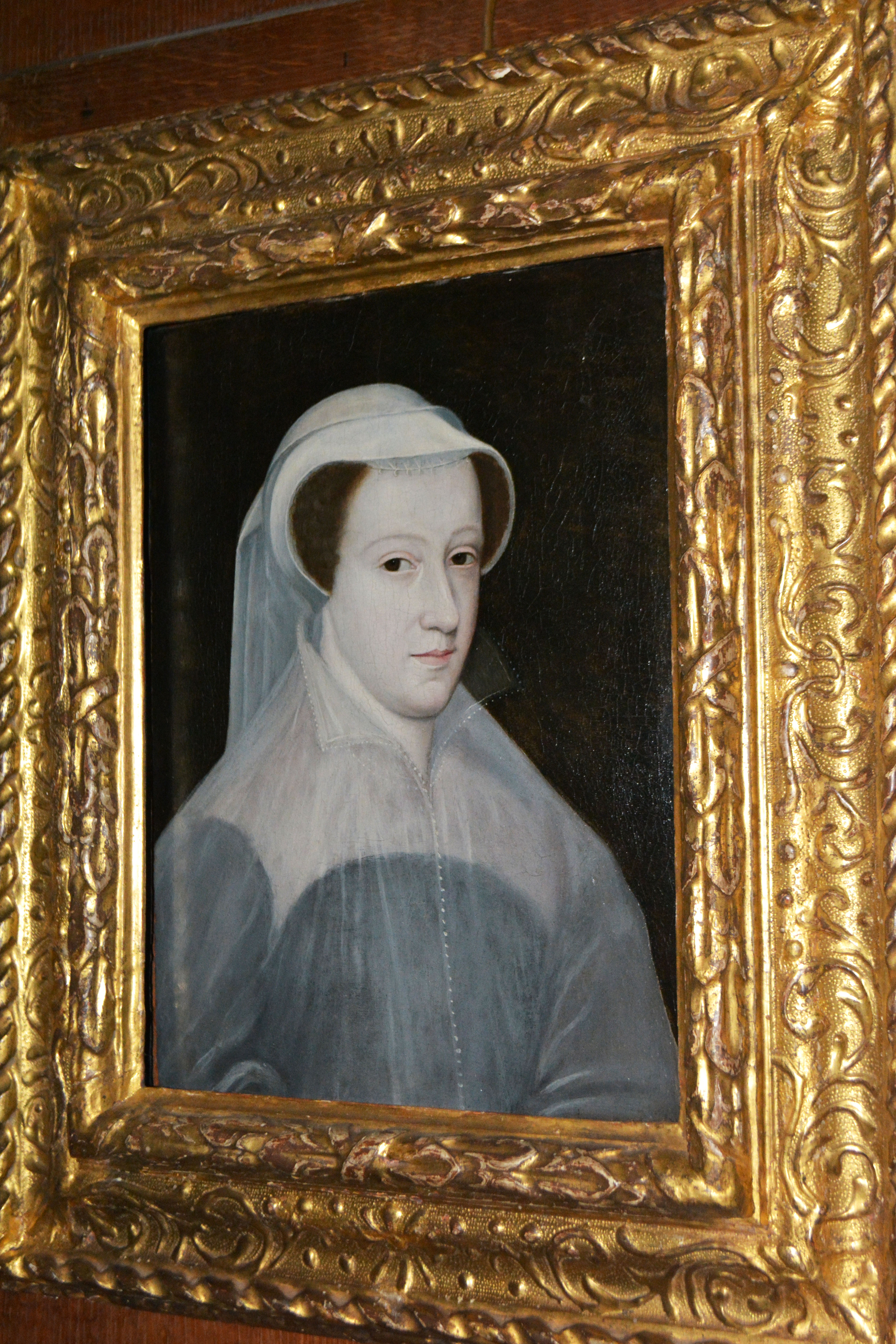 Stylistic analysis further confirmed that this portrait was painted in the mid-16th century, making it a highly significant addition to her visual historical record.

The work is believed to come from the studio of François Clouet (c.1510 –1572), a French Renaissance miniaturist and painter, particularly known for his detailed portraits of the French ruling family.

The discovery of this contemporary likeness of Mary Queen of Scots is particularly important as there are only two portraits of her in mourning - the second one (in full mourning) is in the Royal Collection. The Hever work shows Mary in a form of mourning, but not the full mourning seen in earlier portraits.

Hever Castle has recently reopened to visitors following the lockdown, so visitors are able to see the portrait on display in the Staircase Gallery.

Holyrood Palace, at the foot of the Royal Mile in Edinburgh, is one of the buildings with the closest links to the story of Mary Queen of Scots and is filled with historic items that belonged to Mary.

Mary’s outer chamber at the palace contains a number of fine portraits, including a Francois Clouet head and shoulders portrait, and a full-length portrait of Mary in mourning dress with the royal arms of Scotland in the background. Behind are two of her ladies and to the left, her execution scene. The painting was first recorded in the Royal Collection during the reign of James VII.

Glasgow’s Kelvingrove Art Gallery & Museum’s Scottish Identity in Art gallery is home to the painting Execution, Mary Queen of Scots by Robert Inerarity Herdman, painted in 1867. In this artwork, a black-clad Mary is shown stepping towards the execution platform, with figures bowing their head in the foreground.

The executioner awaits to the right of the queen. Mary’s attendants Elizabeth Curle and Jane Kennedy are shown, as is Sir Andrew Melville, master of Mary’s household.

The museum’s art collection also includes a 17th-century painting of Mary by an unknown artist and another from the British School, again dating to the 1800s.

Leeds Art Gallery in West Yorkshire has the painting Mary Queen of Scots When An Infant on permanent display. The painting, by Benjamin Robert Haydon (1786-1846) is an oil on canvas painted in 1842 and Queen Marie Guise presenting the infant Mary to Ralph Sadler, the English ambassador, to prove that the baby was in full health.

The painting was donated to the art gallery in 1867 by Sir A Fairbairn.

The Mary Queen of Scots House museum in Jedburgh has, as you would expect, a wealth of memorabilia relating to Mary. A painted panel has a portrait of Mary, alongside three key men in her life: Henry Lord Darnley (her second husband) Patrick Earl of Bothwell (her third husband) and David Rizzio (her secretary and companion).

National Galleries of Scotland hold more than 500 paintings relating to Mary’s life and although many of these are kept in safe storage, a number are on display for visitors to the Scottish National Portrait Gallery to enjoy.

Foremost amongst those on display is Mary Queen of Scots in White Mourning by Francois Clouet. She is shown wearing a white hood and veil in morning for her father-in-law, mother and first husband, just eight months before she left France for Scotland.

The painting is believed to be a 19th-century replica of a 1561 original by Francois Clouet.

Also on display is a c.1613 painting showing Mary’s execution at Fotheringay Castle in Northamptonshire. This watercolour on paper was created for a Dutch magistrate who collected historical prints and drawings.

As holder of the world’s most extensive collection of portraits, the NPG is a great place to see paintings of Mary and key people in her life. The gallery has 166 works relating to the queen including medals, sculptures and drawings.

Please note the NPG is closed until 2023 for essential building works.

The V&A’s British Gallery room 57 is the location for a well-known Nicholas Hilliard miniature portrait of Mary. This watercolour on vellum was created in 1578-79 and bequeathed to the V&A by Herschorn. It would have been painted whilst Mary was in captivity.

The other version of this miniature is in the Royal Collection and this is believed to have been the one that was painted from life.

The museum has several other Mary portraits on display, including Mary Queen of Scots Mourning Over the Dying Douglas by Jane Brumlen (1870) in room 122D and a display of the Oxburgh Hangings (room 57) – large decorative hangings created by Mary whilst in captivity along with Elizabeth Talbot, Countess of Shrewsbury.

There are literally hundreds of places to find Mary Queen of Scots paintings. The below selection are trusted sources and some of them have options to purchase a print.

The British Library have 60+ images related to Mary’s life, including a portrait with her second husband Lord Darnley. The collection is also strong on paintings relating to building’s that played a part in Mary’s story.

The online collections include dozens of prints and book illustrations produced in the centuries following Mary’s execution. They range from portraits to artistic interpretations of dramatic episode’s in the queen’s life.

The Burrell Collection photo library has several fine paintings including Night After the Battle of Langside by Sir John Lavery, painted in the late 1880s, and a colourful portrait by an unknown artist reproduced from an original in the Czartoryski Museum in Poland.

The US Library of Congress might not seem like the most obvious place to search for Mary images but it has some interesting prints to view, including 19th-century John Sartain engravings and Victorian-era paper doll fashion prints featuring Mary. Website. 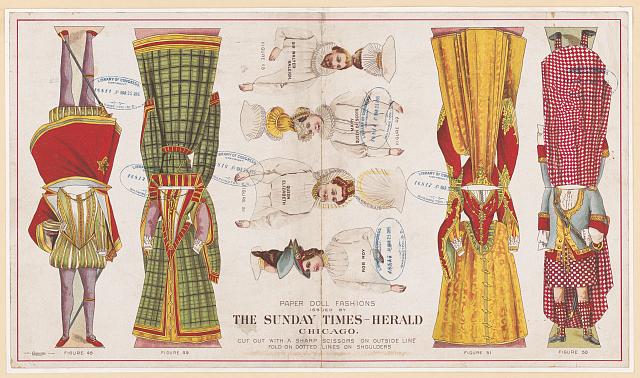 This is a rich online resource, with plenty of information, not only on the works of art themselves but also the artists and often, background detail on where and why the painting was created.

There are more than 500 works to explore with topics including Mary’s execution, the murder of David Rizzio, scenes from Mary’s life and dozens of portraits.

As you would expect, National Library of Scotland holds hundreds of books and manuscripts relating to Mary’s life but what is less well known is that the library also has a small online collection of images. These include a Walter Biggar portrait, plus several interesting 19th-century views of buildings associated with Mary’s life.

The Royal Collection Trust offers online access to a number of fine paintings, including Jacob Jacobsz de Wet II’s only female portrait. There are also several portraits that can be seen on display at the Palace of Holyroodhouse, including the Francois Clouet ‘white mourning’ portrait (c.1560-61).

Explore more than 800 Mary images in the collections of the Met. As well as portraits there are cartoons, battle scenes and artistic representations of episodes in Mary’s life. Many of the images are copyright-free, meaning that you can use them for your own projects and research. 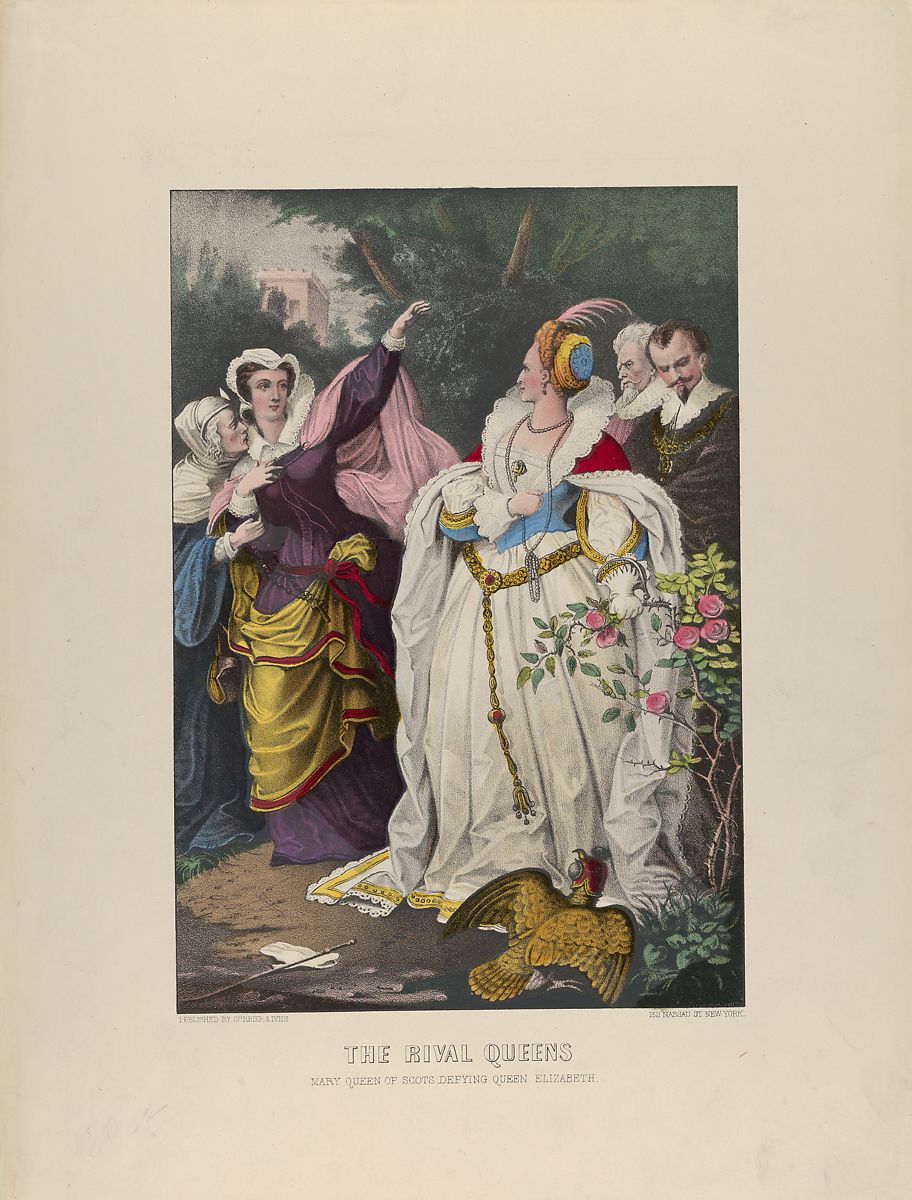 Scran has digital versions of many of the key Mary portraits, as well as other interesting images such as her coat of arms, miniature portraits, letters, coins and seals.

All information correct at the time of writing (July 2020) – History Scotland contacted each location to make sure that the portraits mentioned are on public display (once lockdown restrictions have been fully lifted). However, please check with the individual property before travelling, as artworks may be removed for conservation work or if they have been lent to another organisation.