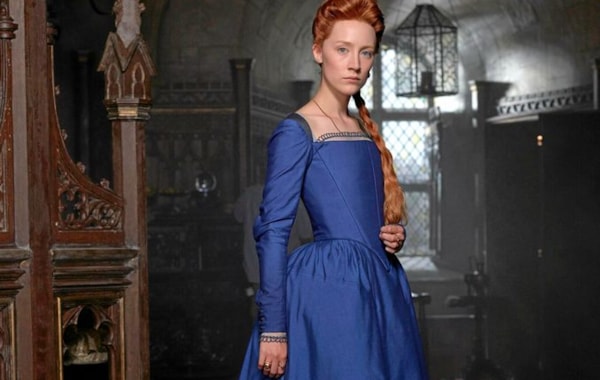 A new feature film, Mary Queen of Scots, has a cast of stars including Saoirse Ronan, Margot Robbie and David Tennant. History Scotland takes a look at what is known about the film so far.

A new feature film, Mary Queen of Scots, has a cast of stars including Saoirse Ronan, Margot Robbie and David Tennant. History Scotland takes a look at what is known about the film so far.

Mary Queen of Scots is played by New York-born actress Saoirse Ronan, who won a Golden Globe Award for Best Actress for her role in Lady Bird (2017) and starred in the 2015 film Brooklyn, for which she received an Academy Award nomination for Best Actress.

Saoirse (pictured here as Mary Queen of Scots) has been seen filming on horseback in Glencoe, perhaps recording scenes in which Mary made a long journey to the bedside of the ailing Earl of Bothwell, who later became her third husband. In the film she has long red hair and has been seen on set wearing a full-length blue dress with striking jewellery.

Margot has been pictured during filming with red hair and her skin made up to look pockmarked, as the Virgin Queen. Josie Rourke, who makes her feature debut with Mary Queen of Scots, told Entertainment magazine about the film’s portrayal of the struggle between Mary and Elizabeth: ‘It’s not one against the other. It’s both of them against a particular environment that pitted them against each other.’ Margot Robbie, who plays Elizabeth I, adds: ‘Everyone manipulated their relationship. It’s complicated, it’s tragic, and it’s bizarre. The only other person in the world who could understand the position they were in was each other.’

Of course, sadly Mary Queen of Scots and Elizabeth I were fated never to meet, despite their fascination with each other. Despite the fact that Mary spent 19 years as Elizabeth’s prisoner in a variety of English prisons, Mary was never able to persuade her cousin to meet her to present her case and ask for her cousin's help to regain her throne. Elizabeth’s fear that Mary was plotting to take her throne meant her advisors were able to persuade her to keep her cousin at a distance. Mary was eventually executed, accused of complicity in a plot on Elizabeth’s life, on 8 February 1587.

History fans will be particularly interested to see how David Tennant will portray Mary’s enemy John Knox, the fiery Calvinist preacher who spoke out publicly against Mary and her method of queenship, branding her an adulteress and a ‘wicked woman’.

Mary’s second and third husbands - Henry Stuart, Lord Darnley and James Hepburn, 4th Earl of Bothwell - will be played by Jack Lowden and Martin Compston respectively. Lowden played Eric Liddell in the 2012 play Chariots of Fire and had a leading role in the 2016 movie War and Peace, whilst Greenock-born Compston played Ewan Brodie in Monarch of the Glen and is perhaps best known as DS Steve Arnott in BBC drama Line of Duty.

QUICK LINK: Other films about Mary Queen of Scots