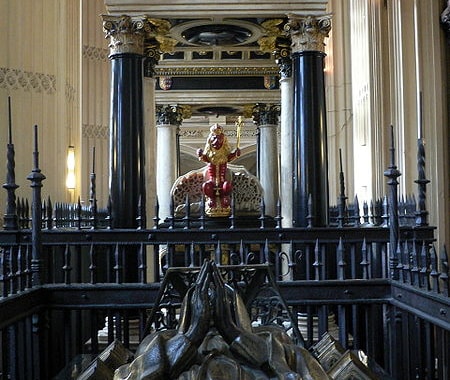 Mary Queen of Scots was executed at Fotheringay Castle on the orders of her cousin Queen Elizabeth I of England, whose prisoner Mary had been for nineteen years. Mary was originally buried on 5 August 1587 in Peterborough Cathedral, which is also the burial place of Katharine of Argon, the first wife of Henry VIII.

Things changed when Mary’s son King James VI/I came to the throne in 1603; by 1612 he had created an ornate and elaborate marble tomb at Westminster Abbey, which is the monument that today’s visitors see. Mary’s body was exhumed and she was buried in the abbey in October of that year.

The tomb stands adjacent to those of Mary’s cousins Elizabeth I and Mary I of England. Westminster Abbey is the final resting place of dozens of kings and queens of Scotland and England, including Mary’s son James VI/I, Charles II, Mary II, and William and Anne.

The Mary Queen of Scots tomb

The Mary Queen of Scots tomb is located in the Lady Chapel in Westminster Abbey, London. A white marble effigy of the queen sculpted by William and Corneilus Cure lays below an elaborate marble canopy, and a Scottish lion is positioned at the feet of the effigy.

The lengthy Latin inscription on the tomb begins with the following, which in translation reads: