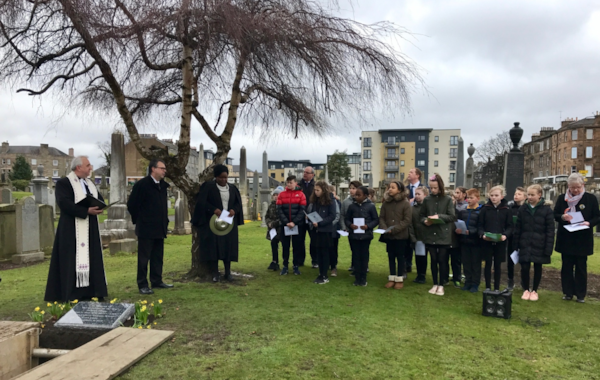 A group of 17th-century plague victims discovered underneath a school playground have been laid to rest in Edinburgh, following a ceremony attended by local children.

A group of 17th-century plague victims discovered underneath a school playground have been laid to rest in Edinburgh, following a ceremony attended by local children.

Pupils from St Mary’s Primary School in Leith helped the City of Edinburgh Council hold a memorial service today (16 March 2018) as the remains of approximately 80 individuals were reburied.

The almost 400-year-old skeletons were discovered during an excavation of the school’s playground by Morrison Construction in April 2016, and identified by archaeologists from Wardell Armstrong. They were victims of the a devastating outbreak of the bubonic plague in the area in 1645, which killed over 2000 people which was half of Leith’s population at that time.

The funeral was held in Rosebank Cemetery – approximately one mile from the site in which the remains were found. Rosebank is one Edinburgh’s oldest burial sites and features a mass grave and tribute to the victims of the Gretna Rail Disaster of 1915, when 215 soldiers of the 1st/7th Battalion The Royal Scots were killed.

The memorial stone for the plague victims reads: In memory of the victims of the 1645 bubonic plague found in St Mary's (Leith) Roman Catholic Primary School Leith Links. Reburied here in 2018.

Mary Bainbridge, Depute Head Teacher of St Mary’s RC Leith, said: “This has been a wonderful experience for all of the pupils at St Mary’s Leith. When the discovery was made, the children were very excited to learn about this encounter with the past and older classes especially were interested to hear about the outbreak of the plague.

"Pupils had the chance to go on site and speak with the archaeologists, and now, they have been able to say their goodbyes. I think they are proud to have been able to contribute in this special way, from selecting and singing hymns to laying flowers. It has been a fantastic learning opportunity for our pupils in lots of different ways and it means the victims will never be forgotten.”

Councillor Donald Wilson, Culture and Communities Convener for the City of Edinburgh Council, said: “An ancient city like Edinburgh never fails to amaze and bring new discoveries. Indeed, there is almost as much history to be found under the city as above ground!

“When these remains were unearthed in 2016, the discovery provided a fascinating insight into our archaeological understanding of Leith. The plague of 1695 devastated the local area. The population of Leith halved in the space of a year as 2,000 lives were lost.

“In many respects our funeral service today is not just a tribute to those who are reinterned today – it is a lasting memorial to everyone who perished in the plague of Leith in 1645. The stone which will mark the burial site will be a lasting and symbolic statement of the history of Leith and ensure that the impact of the plague is not forgotten.”

John Lawson, City of Edinburgh Council Archaeologist, explained the background to the finds: “Leith and the surrounding area has a rich archaeological history and the school excavation has been a fascinating project for everyone involved.

“Analysis of the remains has helped us to understand life in Leith at this time and shed light on the devastating bubonic plague which wiped out over half of the Port’s population.

“These discoveries have helped us establish where this plague cemetery in Leith Links was - as until now its location had been lost, with only 19th-century accounts hinting at its location in this area.”