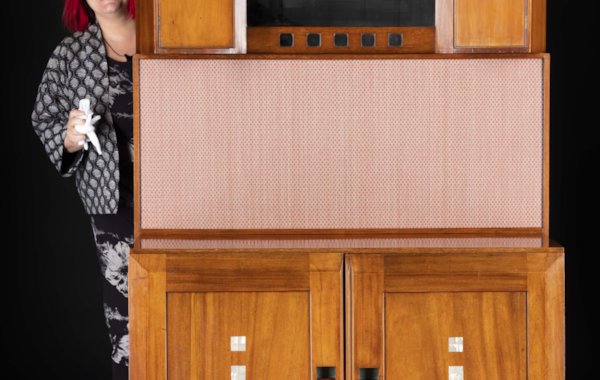 A 'rare and important' wash stand designed by Charles Rennie Mackintosh and made by 'enemy intern' cabinet makers has been acquired by National Museums Scotland.

A 'rare and important' wash stand designed by Charles Rennie Mackintosh and made by 'enemy intern' cabinet makers has been acquired by National Museums Scotland.

Dating from 1917, the wash stand is a rare example of Mackintosh's later work and was made by skilled ‘enemy intern’ cabinet makers at the Knockaloe Internment Camp on the Isle of Man.

Forming part of a bedroom set, the piece is made from mahogany and inlaid with mother of pearl. It is based on a similar wash stand designed in 1917 for the guest bedroom of the Northampton home of Mackintosh's patron WJ Bassett-Lowke.
The Knockaloe camp into which ‘enemy aliens’ were interned during the First World War was set up in November 1917. Many of those interned there were craftspeople who had worked as designers and makers in Britain before the outbreak of war. Due to the skilled work of the interned artisans who made them, the objects which make up these late bedroom sets are of superb quality.
An exceptional piece of furniture
Dr Sally-Anne Huxtable, Principal Curator of Modern and Contemporary Design at National Museums Scotland said:
“This exceptional piece of furniture is a major work by, arguably, the most significant Scottish designer of the Modern period. Mackintosh’s designs from 1916-17 are markedly different from his earlier work in that they are beautifully made and celebrate the qualities of the materials used, rather than just focusing on form and colour. This is an important addition to our internationally significant collections of European art and design, and we are grateful to Art Fund and the Lindsay Endowment Fund for their support.”
The acquisition has been made possible with generous support from Art Fund and the NMS Charitable Trust. The wash stand is now on display in the Design for Living gallery at the National Museum of Scotland.