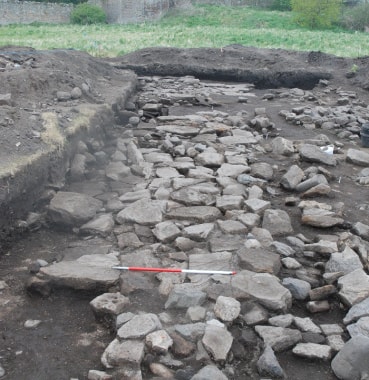 Archaeologists working in the Glebe Field in Aberfeldy have uncovered the remains of an Anglo Saxon building which is one of the largest ever found in Scotland.

Archaeologists working in the Glebe Field in Aberfeldy have uncovered the remains of an Anglo Saxon building which is one of the largest ever found in Scotland. For archaeology, history and heritage news and opinion, sign up for our free e-newsletter.

The find was part of a community archaeology project (led by Aberlady Conservation & History Society and AOC Archaeology) focusing on Aberlady's Anglo Saxon past.

The Heritage Lottery funded community archaeology project took place under the supervision and direction of AOC Archaeology Group, which is also involved in significant outreach work with the local schools. Over 350 pupils from six schools visited the two-week excavation, classroom visits have also taken place and a teaching resource, developed jointly with the schools, will be provided as part of the project legacy. The public phase of the project will end with an Anglo-Saxon Feast on  29 October at which pupils formed into bands will perform their very own brand of Dark Age music.

The latest excavations took place in April and May this year when volunteers uncovered what appear to be the remains of small cellular buildings, as well as a 20m x 4m stone feature which appears to be part of a larger stone building which extends to 20m x 40m, making it one of the largest Anglo Saxon buildings discovered in Scotland.

Ian Malcolm of Aberlady Conservation & History Society described the finds as 'Very, very exciting'. He told the East Lothian Courier that the site 'may have been monastic, or a feast hall or a royal site. There have been other excavations but no evidence of a structure on this scale has been discovered.' 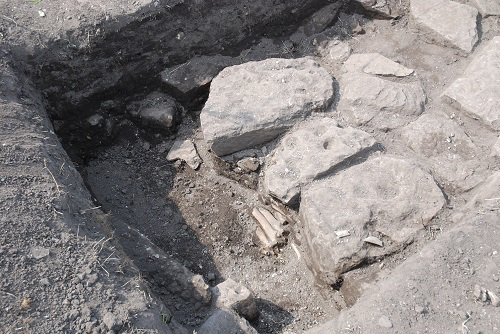 A large mammal (pictured right) found lying beneath the stone remains lived some time between the 7th and 9th century AD. Volunteers working on the site also discovered an early 9th century Anglo Saxon coin, a carved antler with an animal or bird head, and two bone combs, one of which dates to at least the 6th to 8th century.

A report on the Aberlady Angles website states that the excavation has revealed 'further evidence of an important and wealthy Anglo Saxon location'.

The latest finds are consistent with the dates of the largest collection of Anglo Saxon coins found in Scotland, which were discovered on the site in the 1980s, as well as the fragment of an Anglo Saxon cross found in the 19th century; adding weight to the theory that this was a significant Anglo Saxon site.

The Anglo Saxon project will continue until November, with post excavation analytical work continuing, as well as community-based activities including lectures, school workshops and a celebratory Anglo Saxon feast to mark the end of the project.

For more information on the Aberlady Angles Anglo Saxon project, visit the website. The project is sponsored by the Heritage Lottery Fund.