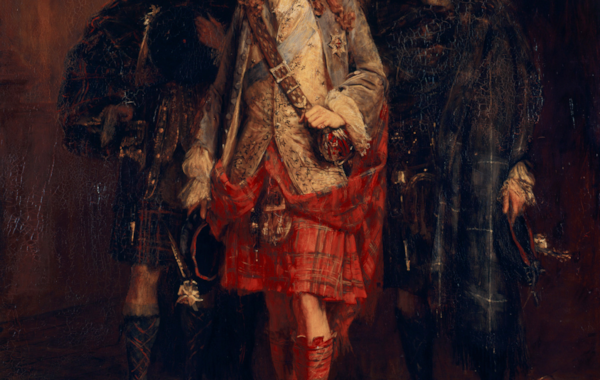 The digitisation programme will provide unparalleled insight into the social, military and personal worlds of the exiled Stuart dynasty and their Jacobite followers, as they fought to regain the thrones of Scotland, England and Ireland between the late 17th and early 19th centuries.

QUICK LINK: Who were the Jacobites and what did they want for Scotland?

The Stuart and Cumberland Papers project has made accessible online a total of 245,000 documents from the Royal Archives at Windsor Castle.  The project has been undertaken in partnership with Gale, a Cengage Company, a leading provider of educational technology for libraries.  Digitised over a period of 18 months, the papers are now available as part of Gale’s State Papers Online programme and can be acquired by academic institutions and libraries worldwide to offer researchers and students a unique window into this turbulent period of European history.

Who were the Stuart claimants to the throne?

The Stuart claimants to the throne were the descendants of James II (James VII of Scotland), who was forced from the throne and replaced by his Protestant daughter Mary II and her husband William of Orange during the Glorious Revolution of 1688.  From then until the death of the last Stuart heir in 1807, the Stuarts were exiles in Europe, at the head of a complex network of Jacobite supporters at home and abroad.
The Stuart Papers bring together the private and diplomatic correspondence of James II; his son, James Francis Edward Stuart, nicknamed the Old Pretender; and his grandson, Charles Edward Stuart, better known as Bonnie Prince Charlie; as well as telling the story of their wives and mistresses, loyal followers, courtiers and spies. A significant proportion of the papers are wholly or partly in cipher, often with the translation written above each line.
In July 1745, Bonnie Prince Charlie sailed from France to Scotland with plans to raise a Jacobite army against the Hanoverians and regain the throne for his father. By April 1746, the two sides were preparing to meet at Culloden Moor.  A memorandum in the Stuart Papers written by General Lord George Murray details the combat orders issued to the exhausted Jacobite troops: 'It is required & expected that each indeviduall in the Armie as well officer as Souldier keeps their posts that shall be alotted to them, & if any man turn his back to Runaway the nixt behind such man is to shoot him. No body on Pain of Death to Strip the slain or Plunder till the Batle be over. The Highlanders all to be in Kilts, & no body to throw away their Guns; by HRH Command.’ 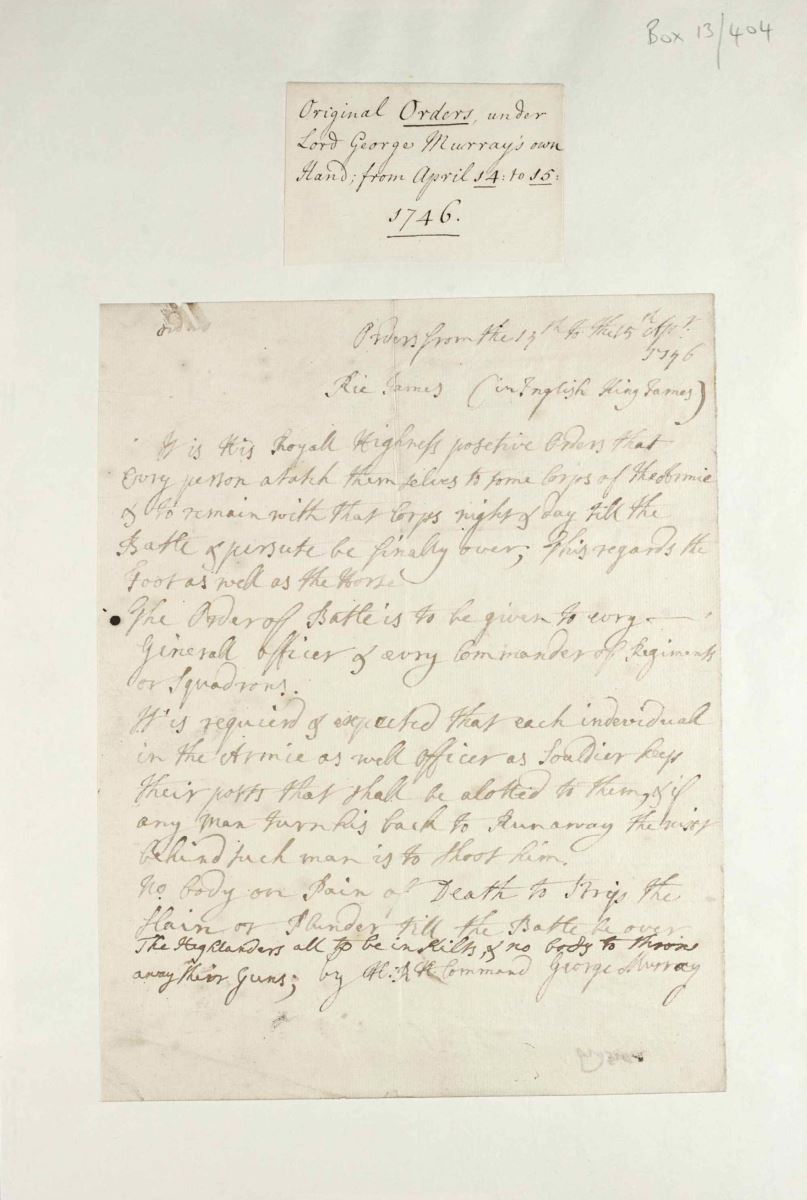 The Jacobites at Culloden

The Jacobites suffered a catastrophic defeat at the Battle of Culloden (which you can read more about here), and Bonnie Prince Charlie fled to France.  In a letter dated 28 April 1746, the Prince wrote to his Scottish Chiefs, justifying his reasons for leaving Scotland and asking them to conceal his departure for as long as possible.  He wrote, 'When I came into this Country, it was my only view to do all in my power for your good and safety, This I will allways do as long as life is in me, But alas! I see with grief, I can at present do little for you on this side the water, for the only thing that can now be done, is to defend your selves, ‘till the French assist you…'
Two months later, in one of the most personal letters to be found in the Stuart Papers, Charles’s father, James Francis Edward, wrote to him to discuss the failure of the 1745–6 rebellion.  The Prince urged his son: ‘Do not for Gods sake drive things too far, but think of your own safety, on which so much depends; Tho’ your Enterprize should miscarry, the honor you have gaind by it will always stick by you, it will make you be respected & considerd abroad.’ While the majority of the letter was dictated by the Prince to his Secretary, the last sentence was added in the Prince’s own handwriting: 'Adieu my dearest Child I tenderly embrace you & am all yours once more God bless and protect you, James R.'

Digitised alongside the Stuart Papers are those of William Augustus, Duke of Cumberland, the second surviving son of George II, who was a key figure in the Hanoverian monarchy and Captain General of the British Army between 1745 and 1757. In 1746, he was also appointed Ranger of Windsor Great Park, a role he retained until his death in 1765. By making available these two distinct but historically related collections, The Stuart and Cumberland Papers project offers unique perspectives into both the Jacobite risings and the methods used by the ruling Hanoverian monarchy to suppress them. 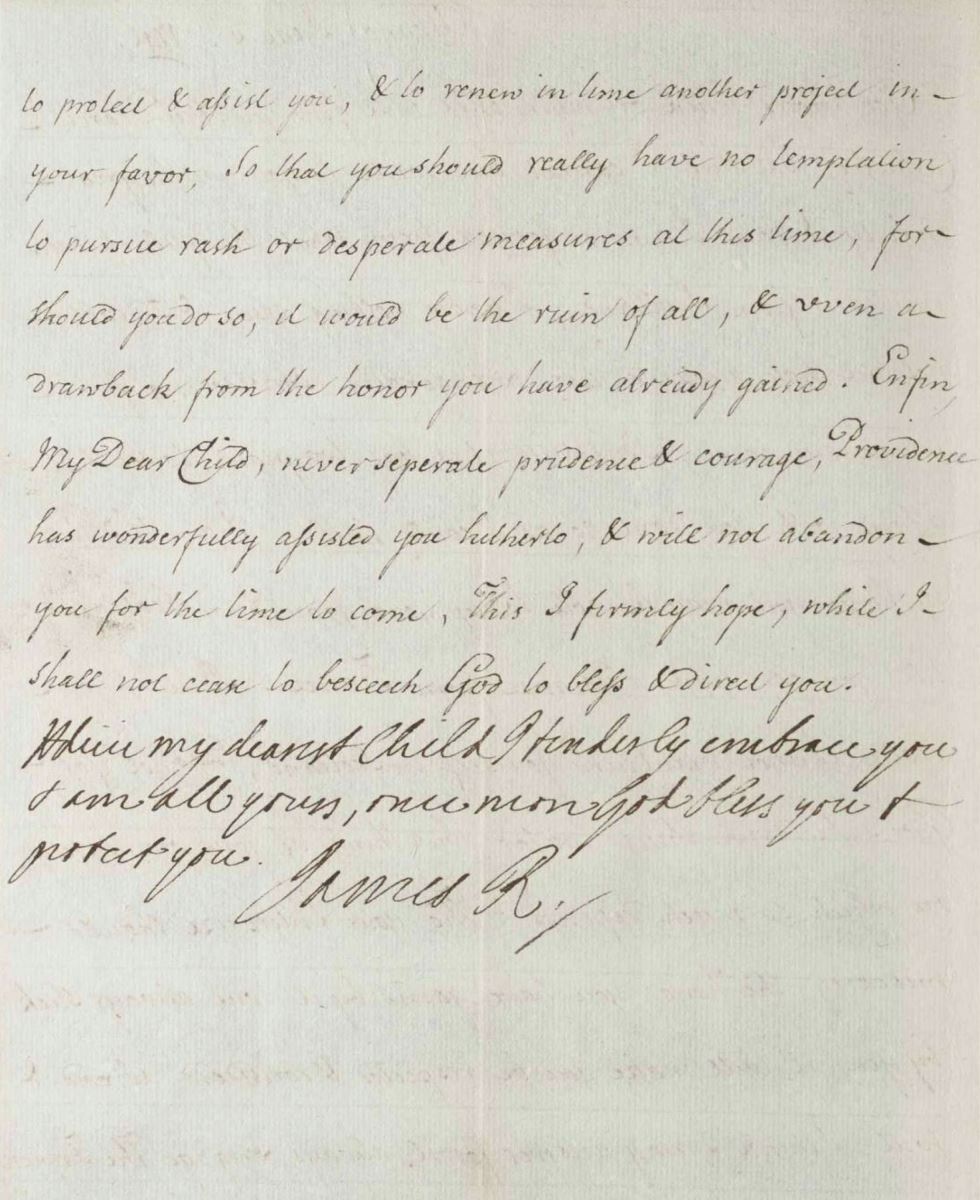 An account by Lord Charles Cathcart, Aide-de-Camp to the Duke of Cumberland, describes the British victory at the Battle of Culloden, and includes sketches showing the order of the battle.  He describes how the Hanoverian forces, ‘after leaving 1,000 dead’ on the battlefield, pursued the fleeing Jacobites and ‘cut 1,000 to pieces’, as well as taking several hundreds of French prisoners.
Oliver Urquhart Irvine, The Librarian & Deputy Keeper of The Queen’s Archives, said, ‘The Stuart and Cumberland Papers project forms part of our ongoing commitment to make the historic treasures of the Royal Archives as widely accessible as possible through digital technology.  We are grateful to our partners at Gale for enabling us to make this invaluable resource available online, giving students and scholars from around the world the opportunity to explore these compelling original documents first-hand.'
Seth Cayley, Vice President, Gale Primary Sources, said, ‘The history of the exiled Stuart Court, with all of its intrigues, larger-than-life personalities and thwarted ambition, is revealed in intricate detail through these documents and papers of court life and politics. The digital availability of the Stuart and Cumberland Papers in State Papers Online will enrich 18th Century Studies research around the world. Gale would like to thank the Royal Archives for collaborating on this milestone project.’
Images Royal Archives / (c) Her Majesty Queen Elizabeth II 2018