The complex history of a rural medieval building in Aberdeenshire 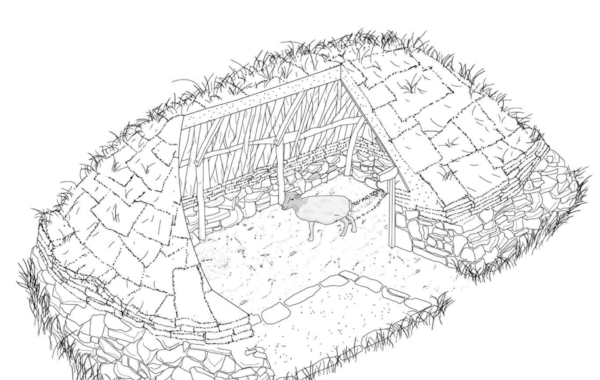 Newly published research by GUARD Archaeology has revealed the complex history of a turf and stone-built medieval building of a type which is rarely identified within the landscape.

The complex history of a rural medieval building in Aberdeenshire Images

Newly published research by GUARD Archaeology has revealed the complex history of a turf and stone-built medieval building of a type which is rarely identified within the landscape.

Sherds of pottery obtained from the floor of the structure suggest it was in use during the 14th and 15th centuries AD. However, its construction is similar to other excavated buildings dated to the early medieval period. Radiocarbon dates obtained from several features and deposits ranged from the Bronze Age, through the Iron Age to the medieval period. The structure is an uncommon survivor of medieval rural settlement that is rarely excavated in Scottish archaeology.

In 2013, GUARD Archaeology Ltd in conjunction with Amey and on behalf of Scottish and Southern Energy conducted an archaeological evaluation on an area of ground proposed as part of the expansion of the Kintore Sub-Station, south-west of Kintore, Aberdeenshire. The work exposed the remains of a large rectangular enclosure with an adjacent small building. Further excavation and a topographic survey were undertaken between June and August 2014.

The rareness of the Kintore medieval building is predominantly due to the lack of identification of them in the landscape, the result of their construction using perishable materials such as clay and turf, and changes in land-use which have led to their destruction. Often the stones from these buildings have been systematically removed over time, or the buildings replaced with new structures, or adapted to different uses. The survival of the Kintore building, despite being partially damaged and robbed, might be due to the marginal nature of the ground it sits on, which is very boggy in places and contains a large amount of stone, both above and below ground, which inhibited ploughing that might otherwise have removed all traces of the building.

The wide range of radiocarbon dates obtained, from the second millennium BC to the second millennium AD, might appear to suggest long-lived occupation of the site. However, based on the latest of the radiocarbon dates and fragments of a Scottish Medieval Redware jug found within it, the building appears to have been abandoned post-15th century AD. The lack of evidence of any earlier structures or artefacts relating to the early medieval and prehistoric dates indicates that their presence might be due to other factors, such as the use of (older) peat as a fuel or building resource. Peat deposits are known to exist locally, therefore its use as a fuel and possible building material is not an unreasonable supposition.

Better preserved medieval buildings, such as at Pitcarmick in Perthshire, retain clear divisions between a living end containing a hearth, and byre end with a central drainage slot. No such internal arrangements were apparent at Kintore but soil micromorphology analysis of the soils within the building suggest that there were differences between floor deposits at either end. The west end was associated with domestic activities and the east end was richer in livestock dung, which may indicate the internal division of the house. While there was no central drain within the byre east end of the building, this lay at a lower level than the west end, with the slope aiding drainage if animals were housed there.

The full results of this research, which was funded by Scottish and Southern Energy, ARO26: The complex history of a rural medieval building in Kintore, Aberdeenshire by Maureen C. Kilpatrick has just been published and is now freely available to download from the ARO website - Archaeology Reports Online.