A Scottish Christmas in the Fifties - Scottish nostalgia 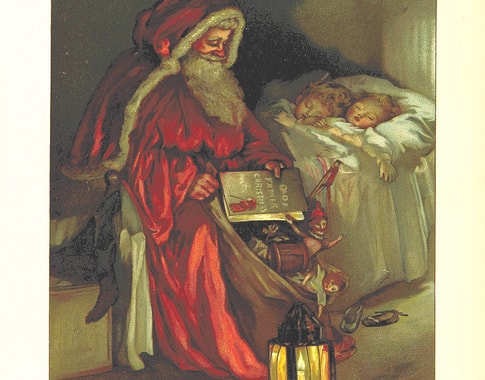 Christmas in the Fifties

Bob McMillan recalls the excitement of the run-up to Christmas in 1950s Glasgow, when the department stores of Argyle Street had every toy a child could wish for.

Bob McMillan recalls the excitement of the run-up to Christmas in 1950s Glasgow, when the department stores of Argyle Street had every toy a child could wish for. Read more memories of bygone Scotland in our reader memories collection.

It was only early December but already the excitement for me as a child had begun to build towards Christmas. We lived in a single end, a house with just one room, and had little money, although we had a few paper chain decorations and a few fold-out paper bells to hang up and make the place feel Christmas-like. We pinned the decorations so that they criss-crossed the room and draped the walls.

We had gas lighting and so the Christmas tree lights were battery operated and used sparingly, say an hour per evening. I loved that wee house when it was all decorated like that. Dad didn’t because it looked so shabby when they came down that he was nagged in to decorating it!

On the Saturdays before Christmas Mum and I would go in to Glasgow, ostensibly to visit her sister, but really to let me look round all the shops. From Queen Street Low Level station we would go upstairs to our first stop, the giant Christmas tree near the booking office. This beautiful tree usually had a toy train running round it in a fenced off area and a coin in the slot set the train in motion for a few circuits.

From there it was down Buchanan Street to the Argyle Arcade, with feelings of awe and amazement at the corner windows of Wylie Lochead’s store. Here, with windows full of marvellous toys, I would gaze in wonder and search for the little train running round on a shelf up high in the shop foyer.

Poor Mum was then dragged to the Clyde Model Dockyard further into the arcade. Model railway sets (a theme developing here, methinks) Dinky Toys and Meccano were all laid out so that little boys, and not so little boys, could nag their parents to buy.

Then it was out the other end of the arcade and across Argyle Street to the magic that was the huge plate glass windows of Lewis’s Department Store. Each window had a different Christmas theme and these were ceremoniously unveiled at the start of the Christmas season.

For me there was only one floor that mattered, the one with Santa’s Grotto! Here, you were guided by somewhat elderly elves into the grotto where the great man himself was waiting. A few words about being good etc., a quick snap for posterity and it was all over for another year. My wife has a photo taken with Santa in the same place in 1952, so I wonder if we stood next to each other in the queue without knowing it...