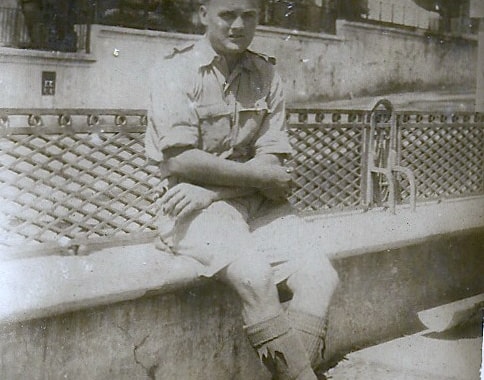 Colin Black tells the story of his father's time in active service back in the 1950s.

Colin Black tells the story of his father's time in active service back in the 1940s. Read more about Scotland in World War Two in our special section.

I think there was a culture among ordinary soldiers in days gone by of not talking about the horrors they’d witnessed in the war, although they knew it was a ‘kill or be killed’ situation it didn’t stop them feeling sorrow and compassion for the loss of another human being.

There must be hundreds or thousands of men like my father, who’ve lived with that sorrow all their lives. I know my father had nightmares when he first came back from the war. Unless they were showing signs of shell shock, or post traumatic stress syndrome as it’s called now, they were demobbed and sent back to ‘normal life’.

My father was a sniper and said a few times it was a terrible thing to shoot a man from so far away. Another thing that affected him was when he witnessed a German U boat torpedo the HMS Ark Royal when he was in Gibraltar.

However, it was only in the latter years of his life that he told me these stories. I’ve recently acquired a photo of my father in his younger days in Gibraltar, given to me by his sister, my Aunt Lizbeth. It could almost be a holiday photo, sitting on that wall in his shorts, clean and tidy, with no hint of the fact he had to ‘wash’ his kit in petrol to kill off the bugs. There were no photos of the hole in the ground with the plank of wood over it that was their latrine. Unlike today, war was a much more basic affair.

So thanks to my father, and the thousands of other fathers, mothers, sons and daughters who answered the call.