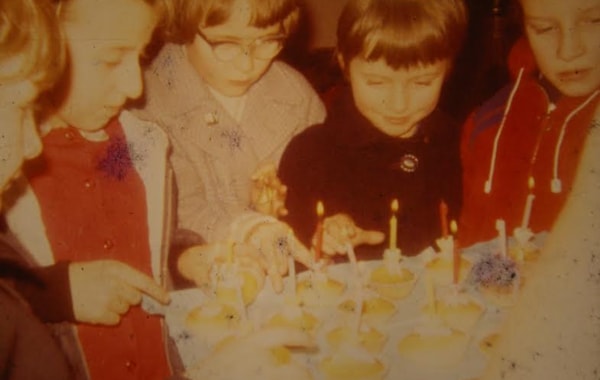 Carolyn O'Hara recalls the fun of celebrating Halloween in the Fifties and Sixties.

During my childhood in the late 50s and early 60s, the month of October was always filled with the excitement building up to Hallowe’en: deciding on what costumes to wear for guising and creating them – no shop bought ones in those days – and then choosing a ‘party piece’ and practising it. Long before ‘trick or treating’ descended on us from America, the performance of a spooky poem, song, joke or tale was essential in order to be rewarded with respectable horde of Hallowe’en goodies.

One year however was a particularly special one for me and my sister, then aged about nine and twelve, when my grandmother offered her home as a venue for a Hallowe’en party, in addition to the going around the neighbours’ houses in the traditional fashion. It must have been quite a marathon for my mother and grandmother organising it, as it was to be a two part affair, the first session for my sisters’ friends, immediately followed by a second session for mine.

With a dining room which featured a large, dark imposing fireplace, it was the perfect location to place a witch’s cauldron - an old jeelie pan. In pride of place were turnip lanterns, supposedly hollowed out by us with typical sibling rivalry, and no doubt mostly with the help of adults. No pumpkins at that time, again before the American influence.

Broom sticks, cobwebs, balloons and spooky lighting created with red crepe paper over lamps generated a suitable atmosphere for what was to follow. Games were very important with dookin’ for apples my favourite. Leaning over – with hands tied behind our backs - above an old baby bath tub, filled with red apples bobbin’ about on the surface of the water, the object of the exercise was to catch one by biting it or alternatively spearing the apples by dropping a fork from your mouth - no mean feat.

Much messier, and therefore more fun, was a similar game involving treacle covered scones. A length of thick string with treacle scones somehow fastened and dangling from it, was attached to the tops of two high backed chairs, and stretched between them. It was then a matter of kneeling and shuffling beneath the string – again with hands secured behind you – and trying to take a bite from the sticky treat.

Other foods were on offer to augment the apples and scones, with sausage rolls of course, and trays of individual sponge cakes, each lit with its own candle and decorated with spiders’ webs.  All the food was washed down with ‘pop’ in different flavours, provided in glass bottles whose metal lids had already been removed, with straws bouncing in the bubbles – the vivid lime green was always my preference.

With toffee apples, and other goodies all wrapped up in multicoloured crepe paper, as parting gifts, our guests were finally treated to some fireworks – albeit a week too early – set off by our dad in the garden. Yes, we were truly spoiled and that party has provided me with one of my fondest childhood memories.