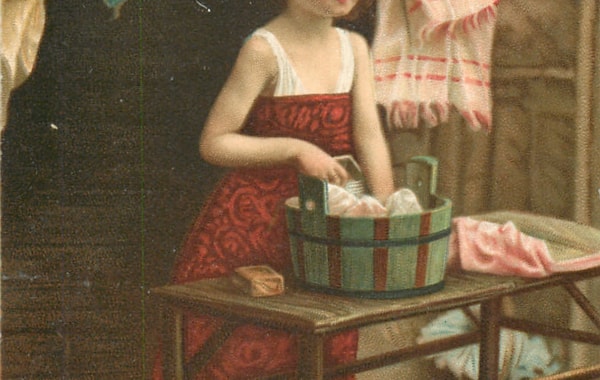 Do you feel intimidated by the vast array of cleaning products on supermarket shelves? Are you putting your family at risk by not using a selection of these products? Was it the advent of supermarkets that brought about this multitude of cleaners, sterilisers, antibacterial cloths and liquids?

In the 1950s there was never such a plethora. My parents and grandparents did have a few dusters, but old vests, shirts and even underpants (they were bigger then) were cut up and used as cleaning cloths on a regular basis. For floor cloths, old towels and terry nappies (remember them?) were ideal.

Washing soda was used for many cleaning jobs. Before going off on holiday my mother used to put some washing soda down the drain followed by a kettle of hot water. it cleaned the drain and stopped it smelling.

Incidentally washing soda is now a coarse powder. When I was young it was pebble we spat our first saliva of the day on a piece before rubbing it on to warts or corns. They soon healed.

Prior to 1916 ordinary soap was used to wash dishes but World War One caused a shortage of fat to make soap, and the first detergents were created. They bore little resemblance to what we now use to hand-wash dishes. Fairy Liquid was first sold in America and did not become available in the United Kingdom until the late 1950s. I very much doubt if it was as kind to your hands as the original adverts claimed.

I remember my mother had a gadget resembling two halves of a small cage into which she placed the last remnants of bars of soap before clicking the cage shut. There was a handle like a spoon handle and whilst holding that she would swirl the item in a bowl of warm water until it became foamy and soapy. It could then be used to hand wash delicates like woollen jumpers or fragile items.

The bedding, towels and shirts were washed weekly in the washhouse boiler. The fire was lit, usually by Dad before he went out to work, and by the time we were off to school Mum would be out in the washhouse, her rubber apron on, and her hair tied up in a scarf. Her flushed face could barely be seen for steam. It was usually Monday and should the weather be against her, she had no option but take her turn at the `green`.

If wet we came home at lunchtime to clotheshorses and pulleys weighed down with drying washing, and broth! It was always broth on washing day and I hated it. The old-fashioned soup bowl with the lip was an ideal place for me to deposit the hated butter beans and peas.