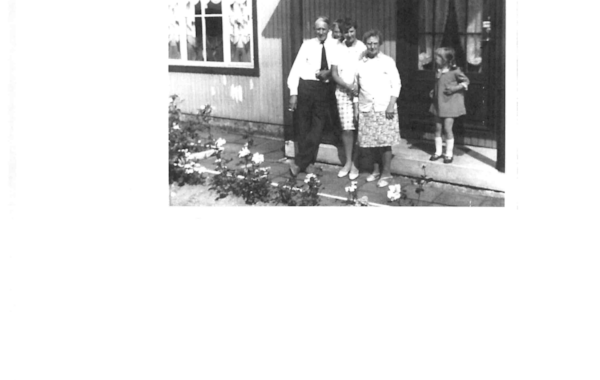 Gary Brewer recalls the pleasures of childhood in 1960s Glasgow, when family life centered around a cosy tenement flat, with plenty of laughter and adventures.

I have the privilege of occupying a position with William Grant and Sons, the well-known Spirits producer, which entails a considerable amount of travel across the globe. As Human Resources Director of the Branded Business Unit & Global Reward, I've had the good fortune to travel to North America, Mexico, Latin America and Europe.

These days, frequent trips to Australia, China, Taiwan, South Korea, Hong Kong and Singapore are very much the order of the day. However, as a child, living in Martyr Street in Townhead, Glasgow, the extent of my early travel related exploits were considerably more modest.

Glaswegians both, my father, who hailed from Springburn, built trains and my mother from Townhead, was originally a tailoress, who became a housewife in the 1960s upon the arrival of myself and then my sister. We conformed to the pattern of relatively long school holidays but with my father being out on leave only for two weeks, for what was the Glasgow Fair fortnight. Although as a railwayman, trips on the trains became a more regular occurrence as we grew older, that time in July each year was inevitably spent at my grandparents home in Balornock, Glasgow.

Remarkably, that seemed almost exotic in those days. We were city dwellers, living in a tenement flat in central Glasgow and the notion of a stand-alone house, with a wrap-around garden, situated next to a large grass area and a small forest was definitely not our everyday experience. Just to add to the novelty, there was a blue police box located outside the front gate (Dr Who anyone?) and down a slope in front of the house was a disused railway track and tunnel. What a magical combination for a child with any sort of imagination and sense of adventure.

My mother came from a large family (four brothers and two sisters), which also meant a constant flow of aunts, uncles, assorted cousins and the resident dog (the imaginatively titled Lassie, a very friendly, black and white mongrel). The house always seemed busy but yet had space for everyone.

When I've passed by the house in more recent years, it has caused me no end of wonder as to how such numbers were ever accommodated in one small structure but there was always noise; always a pot of soup on the cooker and what seemed like endless parties (equally surprising as my mother was church-going, virtually tee-total and her mother would never engage in anything stronger than a small sherry and even then only on special occasions).

A few tales, which have no doubt been subject to a degree of embellishment over the years, stick resolutely in my mind. Family football matches would traditionally be very competitive affairs, believed to last for days on end (a slight exaggeration but certainly from daylight to dusk!)

As the matches became ever more ferocious, my father would typically slide out of view and re-appear in the vegetable garden, glass of beer and whisky close to hand, pottering around in what he regarded as much more civilised pursuits, gardening and enjoying the company of the female side of the family. It probably spoke volumes for his prowess as a footballer that he was rarely missed and all the more content for time spent in the garden.

His contribution on other fronts was markedly more constructive but no less subject to the family's obsession with football. He recalled the time when engaged in decorating the living room, two rolls of wallpaper to complete the task, and the entire male population suddenly materialised, took up position in front of the television, fully armed with copious amounts of alcohol and closed the curtains in readiness for the latest Scotland versus England encounter (at a time when that fixture actually mattered). He swore to the end of his days that he finished the painting and decorating in record time as the match proceeded, angling wallpaper around intoxicated relatives, whilst rounding off the painting by the light off the television.

The consumption of alcohol was a recurring theme in the family holiday, or rather on the part of my father. He enjoyed a game of golf, rounded off by a visit to the local hostelry, which I recall was called the Glen (but time plays tricks on the memory). However neither he, nor my uncle, John, were brave enough to confront their womenfolk with the notion of straight off the golf course and on to a drinking session.

Consequently, they fashioned a slightly circuitous route that involved use of the disused railway track and tunnel, out of the line of sight of the house, which entailed them re-emerging up a grass embankment, golf bags on their back, just at the very entrance to the pub. Ninjas had nothing on those two when the prospect of a satisfying pint or two lay in wait.

For my part, Balornock seemed a world away from the centre of Glasgow. Trees, fields, places to explore, a constant procession of adults and children. It felt like fun; it felt safe; it meant fresh air and freedom and when I watch my own children huddled over phones and game consoles, it makes me slightly sad that they've missed out on similar experiences in their formative years (even if we've spared them the alcohol consumption element, notwithstanding my employment with a drinks company).

I'm sure with the beauty of hindsight matters were not quite exactly as I recall and it's ironic that I now have the opportunity to visit far-flung destinations so frequently and yet find myself harking back to what were in reality very modest surroundings. Perhaps as the years roll past and the family diminishes, the sense of nostalgic longing is more founded in a fondness for long-departed family members than the actual location but sometimes enjoyment can be found in the least likely places’.