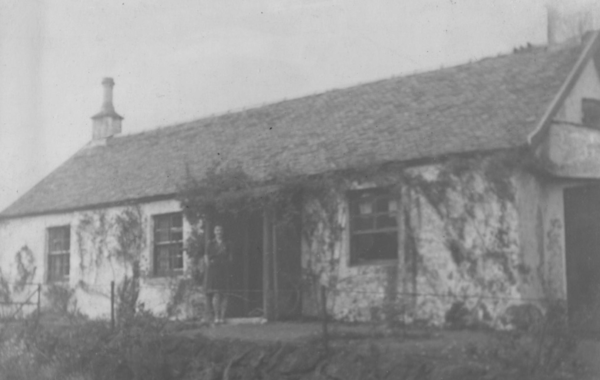 The house where the twins stayed

One night in May 1941, my grandfather was in the garden when he heard the dull drone of planes in the distance. Then all hell broke loose and the noise of explosion after explosion merged with the sound of anti-aircraft fire. It was the start of a two-night bombing raid on Greenock. All grandfather knew at that stage was that something terrible had happened, and was later to learn of the devastation and loss of life inflicted by German bombs.

My grandparents lived and worked on an estate five miles outside the village of Kilmacolm in Renfrewshire. The house (pictured) where they worked was called Glenmill and they, along with my mother and aunt, lived in one of the estate cottages.

As soon as they were allowed, my grandparents borrowed their employers’ car and headed for Greenock. They were anxious about my great-grandparents and wanted to see if they had survived the bombing. They were fine and had managed to make it to the air raid shelter before the bombs fell.

Their tenement building was still standing however everything on the opposite side of the street had been blown to smithereens. They met Mr Elliot, a neighbour of my great-grandparents, and stopped to talk about the bombings. He was pushing his twins and everything he could salvage, in a pram. He told them that his wife had died two months ago from TB and he was finding it hard to look after Rita and Archie. Now that they were homeless, he didn’t know how he would cope. They listened and sympathised, then went on their way.

As they walked away, Granny turned to Grandpa and said: ‘Should we offer to take the weans until he sorts himself out? They’d have fresh country air to breathe and decent wholesome food to eat. Jenny’s fourteen now she could leave school and look after them. What do you think?’

Grandpa agreed, they ran after Mr Elliot catching up with him at the end of the street, and put their suggestion forward. He willingly accepted the offer and taking their address, promptly handed the twins over. He promised to visit when he could. All they had were the clothes on their backs.

Rita and Archie were eighteen months old when they arrived at Glenmill Cottages. Rita was chatty in a baby kind of way, but Archie was much more solemn and didn’t attempt to speak. He didn’t laugh much either and seemed to be one very unhappy toddler. If there was any mischief afoot, like pulling the heads off Grandpa’s prized flowers, when questioned, Rita would pipe up with: ‘Achie did it.’ She couldn’t quite pronounce his name but they all understood what she meant, even if it wasn’t true.

My Aunt gave up school two months early to help look after them. Rita and Archie stayed for two years and their father visited once. Then out of the blue he turned up one day and said that he had a new house in a different area, a job in the shipyards and had remarried. His wife was expecting a baby and he would like to take the twins home. He thanked them for all their help.

They never received a penny for looking after the twins and nor did they want anything. It was reward enough to see how Archie had finally come out of his shell and Rita had blossomed under their care. My Grandparents never set eyes on the twins again or heard anything about them or their father.