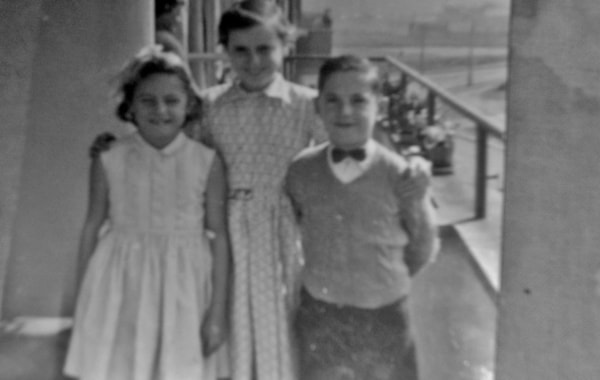 Memories of Glasgow in the 1950s Images
Mary Brown recalls her childhood in 1950s Glasgow.

1953 was an exciting year. We had a street party for the Coronation, with sandwiches and cake. Union Jack flags decorated the tables, and I had a special pair of Coronation socks. They were white with a Union Jack design round the ankles.

That same year we moved into a new flat. Houses were being built on the outskirts of Glasgow, and our new home had a living room, two bedrooms, a kitchen and a bathroom. We also had a veranda. It must have been a dream for my parents to look out over fields instead of dull grey tenements.

We played outside all year round and the field had a flat area that was perfect for playing football or rounders. The nearby railway tunnel and embankment were great places for cowboys to plan their next ambush.

Play was often interspersed with shouts of ‘Here’s a train!’, and we’d all charge across the field, the object of the race being to climb on the fence and wave to the driver before the train had passed. Like the railway children but minus the landslide and red flannel underwear.

We sometimes ventured further afield, up to Springburn Park and one day I was asked to take my young brother and cousin with me. I would be about nine years old. My friend and I had planned to go on the paddleboats, but only had enough money for the two of us and my mum had no spare cash. We hatched a plan. Leaving the two younger ones who were aged about six, at the far end of the pond, my friend and I waited in the long queue for our turn. Then paddled the boat across to pick up our two passengers.

My brother managed to get on board, but when my cousin stepped on the side, the boat tipped and she ended up in the pond up to her armpits in algae covered cold water. The ‘boat attendant’ blew his whistle, waved his arms frantically while shouting the immortal, ‘Come in Number 5.’ Our time was up.
I have no recollection of how my cousin got out of the pond. I do remember the long walk home, with her crying because she was soaked, and me crying because I was in big trouble for not taking care of her.

Despite my friend bringing a towel out of her house and our attempts at drying my cousin off, it was all in vain. My young brother could always be guaranteed to tell tales, and my mother was waiting at the door for us when we went upstairs.