Memories of railway coach holidays in the 1960s - Scottish nostalgia 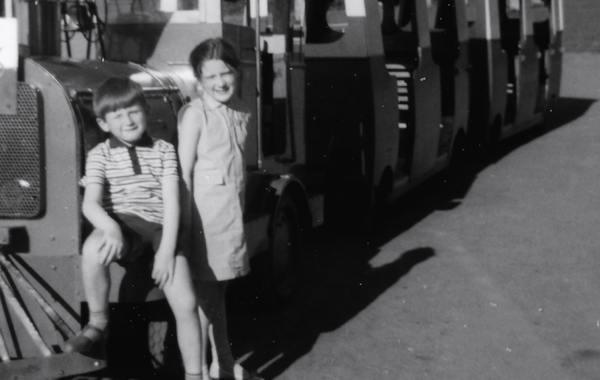 Barbara and her brother

When we were very young, in the mid 1960s to early 1970s, our dad worked for British Rail and I remember summer holidays with my family spent in what were known as camping coaches. These were ‘retired’ train coaches situated beside stations and fitted out as holiday lets. On entry up a small wooden stair there was a family area and kitchen to the right. The bedrooms were along a corridor on the left, with scarcely enough space even for the bunk beds. The toilets and washing facilities were in a separate outbuilding, but this was no hardship. At the site in Kingussie, it was great fun collecting buckets of water from the outside tap.

One of the conditions of renting a camping coach was that tenants purchased rail tickets to get there. I loved the train journeys to the Highlands, watching the Glasgow tenements and warehouses change to woods and hills. We stayed in remote places such as Monifieth, Kingussie and my favourite, Glenfinnan, where the sense of freedom was fantastic. There was also a sense of fun, and dare I say it, magic.

There were often other children in our group – cousins or friends. My mother seemed to gather them up. We would play ‘hardy heads’, a game that involved two players fighting with a type of thick grass until the head was knocked off one of the stalks, or we’d skim stones across the surface of the nearby lochs. When it was raining, we played card games, or hunted for hidden objects indoors. On one occasion my toy cat decided to hide in the frying pan. Despite numerous whirls in the washing machine since, I swear I can still smell sausages on him.

The coaches were looked after by the local railway staff, who were friendly and helpful, even to a bunch of children. One young man in Glenfinnan let us ride with him on his motorbike in the station yard with a nervous mum watching on.

From 1970 the number of coaches on offer dwindled. Other types of holidays were becoming popular and stations no longer had the staff to maintain the coaches. Our last camping coach holiday was in 1971, when we ventured down to Abergele in North Wales. By then my eldest sister was eleven and had grown out of childish games. We spent the fortnight bugging Charlie (the beach donkey man) until he gave us free rides. It was the end of an era, so to speak. The following year was one of the worst holidays of my childhood. We went to a holiday camp where all the entertainment was inside the camp and organised by grown ups. I guess they were doing their best.

Nowadays, upgraded camping coaches are again available for holiday rent in some locations, including Glenfinnan. Every so often I look at the details online and am tempted, but no. To paraphrase AA Milne, ‘It isn’t really where I was. It’s somewhere else instead.’