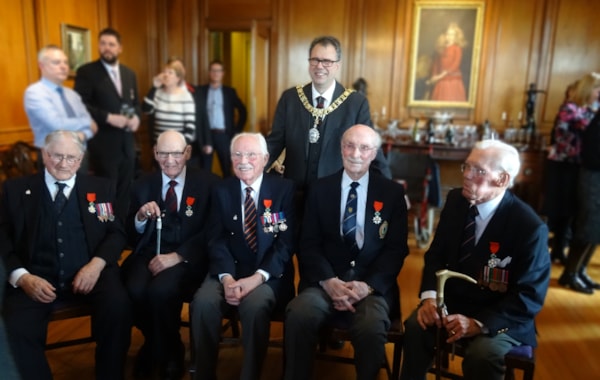 The Scottish veterans were presented with the Chevalier de la Legion d'Honneur medals, in a reception held by the Lord Provost Donald Wilson in the City of Edinburgh Council City Chambers.

The award honours them for the role they played in liberating France during the war – four of the veterans took part in the D-Day landings in June 1944.

The latest medals were presented by Emmanuel Cocher, the French Consul General in Scotland who said: I am truly honoured to present these veterans with the Légion d’Honneur. France will never forget the bravery they showed in taking part in the Liberation of France seventy years ago.

'The actions and sacrifice of these men, and that of so many who fell on the battlefield, was instrumental in bringing back freedom and peace in France and across Europe.' The veterans awarded the insignia of Chevalier de la Légion d’Honneur are:

Alexander Addison, 93 years old, from Edinburgh. A Corporal in the Royal Army Service Corps, he served as a Corporal Cook and went over to France at the start of the D-Day landings then advanced through France and on to the Rhine at the end of the war.

Thomas Gilzean, 95 years old, from Edinburgh. A Sapper/Royal Engineer in the Army, he landed in France at the beginning of October 1944 in Dieppe by landing craft from Newhaven, Dorset as a member of 30 Armoured Corps Royal Engineers. After being transferred to 210 Airfield Construction Company, where the Corps were concerned with runway construction, accommodation building and Bailey Bridging at a site South West of Paris he moved on to Belgium, Holland, Eindhover, then onto Germany.

Alexander Mees, 89 years old, from Edinburgh. A Seaman in the Royal Navy. At the age of seventeen he was on board Landing Ship Tank (LST) 199 as a boy seaman, landing equipment and French Canadian military personnel during the landings at Juno Beach.

Jim Alexander Stirling, 90 years old, from Hawick. Mr Stirling served as a trained Telegraphist on a Motor Minesweeper of the Royal Navy, his vessel's task was to ensure that two lanes were cleared in darkness in to the Normandy Beachheads prior to the first waves of troops landing. When that task was completed his vessel had to ensure that anchorages were swept clear. Following D-Day this work continued constantly as new mines were being laid or dropped by the enemy.

David Watt, 90 years old, from Edinburgh. Lance Corporal, Royal Electrical and Mechanical Engineers. He embarked to France in June 1944 for D-Day and landed at Gold Beach, then went to Arromanches, Bayeux, Caen, Rouen, on through Belgium, Holland, Eindhoven, Nijmegen, Arnhem, and eventually Hamburg in Germany.

SERVICE TO THE COUNTRY

Lord Provost Donald Wilson said: 'I am delighted and honoured to host this special presentation in the City Chambers. Our Armed Forces, both serving personnel and veterans, need our continued support and gratitude for the risks they take to keep us safe.

'The gentlemen here today have my utmost respect and I join the Consul General in expressing my appreciation for their service to the country and their heroism.'

The ceremony is the latest in a number of special ceremonies that have taken place throughout the UK, since the 70th anniversary of D-Day in June 2014, when President François Hollande pledged to honour all surviving British veterans who had served in France during in 1944-45.

For more on Scotland and World War Two, visit our special website section.