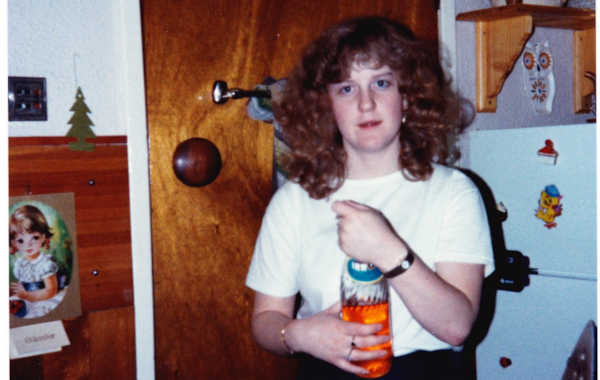 Sharon after a shift at Mathieson's

I was sad to hear of the closure of a local Falkirk business called Mathiesons. I have fond memories of being a “Saturday girl” there in the early 1980s. I was only 16 when mum got me a job as a waitress in their restaurant.  This was a family firm which had two restaurants, a café and two baker shops in Falkirk with many other shops in the surrounding area.

On the first day I worked with another Saturday girl to show me the ropes before I went solo.  I carried hot meals and silver teapots on a wooden tray to the locker area. From there I served them to hungry customers. I thought I’ll never get the hang of this but I soon did. Although I did make a few mistakes – I poured lentil soup over a lady’s skirt and dropped a plate of macaroni on the floor which landed macaroni side down of course!

This was a traditional restaurant and I served High teas with toast and main meals followed by a selection of scones and cakes. The vanilla slices were yummy but the chocolate éclairs were amazing, oozing fresh cream with good quality chocolate covering both sides.

Customers had a choice of English tea, Lemon Tea (called Russian Tea), black, brown or white coffee. Starbucks – you weren’t the first!  There was a strict dress code, a bit like the Lyons nippies. I wore a black skirt, white blouse and white apron tied at the waist. Those aprons became quite a fashion statement amongst us Saturday girls, the frillier the better.  Long hair had to be tied into a ponytail.

On one of my early days I wore a pair of new red shoes which lacerated my heels. The head waitress, Barbara, found a pair of scholls for me so I could finish my shift. The permanent ladies were proper old school waitresses who taught me well. “Always keep your tables clean, clear dirty plates quickly, and pay attention to all of your tables all of the time. A customer should never have to struggle to attract your attention. Smile and be polite”. Still good advice today for anybody in the restaurant trade.

In those days the restaurant was mobbed. The queue of people waiting to get in was halfway down the stairs as I passed them to start work at half past one. It was a large restaurant and in the early days I believe they held ballroom dances.

Floorwalkers escorted customers to their tables. Once their high tea was finished I wrote out their bill on my receipt notepad. The customer took this to the cashier who sat in a booth, behind a glass window, looking very important. The kitchen was above the restaurant and there was a dumb waiter to send meals down to the “Still Room”.

This was a behind the scenes room on the same level as the restaurant. This room operated at Benny Hill speed, dishes were washed, teas and coffees were made, vegetables and chips were added to the meals. Waitresses ran in one revolving door, picked up their orders and rushed out the other revolving door (there was a one way system in place). Still Room indeed!  Never was there such a misnamed place!

The family bosses were very hands on. We called them Mr Jack, Mr Donald and Mr Ian to show our respect. Mr Ian certainly earned my respect. He was the boss’s son but rolled up his sleeves literally to tackle whatever needed done whether that was serving chips or clearing plates. Nothing was beneath him. I’ve tried to take that philosophy forward in my own working life.

My wages were about £4.00 for 5.5 hours work but I used to earn nearly as much in tips. Most people left something. Once I received a tip from someone I didn’t even serve. Turned out it was my dad’s friend.  At the end of the night all the waitresses used to get a meal. Their steak pie was ace and, yes, it was me who used to annoy the cook by asking for a cheese and peach salad but with pineapple instead of peach. She complained but she made it for me all the same!  We weren’t supposed to get any cakes but I must confess we sometimes hid them in a napkin for later. They were too good to resist. Sorry Mr Ian.

One night I was amazed to see Scottish entertainers Johnny Beattie and Alan Stewart coming in for a meal. I was glad I didn’t serve them though. I would have been too nervous. From those days, over thirty years ago, I know how to set a table properly and always warm up plates before serving food. Mr Jack always said, “Hot foot and cold plates don’t go.

Most importantly I learned the work ethic from the older waitresses and the importance of camaraderie and support in the workplace. I also believe good service should receive a tip! Mathiesons may have closed its doors but it lives on, not only in my memories, but in those of many “Falkirk bairns”, not least because of those magnificent chocolate éclairs. The search is on to find a replacement...