When children should be seen and not heard - Scottish nostalgia 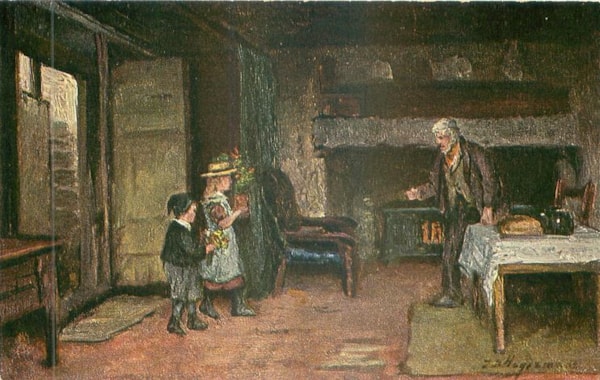 David Ross recalls visits to his grandparents in Glasgow, in the days when children were expected to stay in the background.

David Ross recalls visits to his grandparents in Glasgow, in the days when children were expected to stay in the background.

It wasn’t something I looked forward to, the weekly visit to Gran and Granddad with my mother. The bus journey into Glasgow was nothing special but when we changed to the tram it became somewhat magical, almost like a fairground ride.

Expectations were high when we got off the tram. Mum usually bought me an ice-cream cone from the Italian owned café opposite the tram stop. Later when Gran was quite ill we’d also visit a local off-licence and mum would have a small flat, round bottle filled up with whisky. The doctor had told mum it wouldn’t do her (Gran) any harm and may be beneficial.

It was an inside corner tenement; narrow at the front and wider at the back this made it quite large with three bedrooms. The close lights were gas lit every evening by the lamplighter at dusk. It was a sad house, once inhabited by quite a large family, but now just the two old folk and my unfortunate Uncle David and his cocker spaniel Amber. Once inside my mood changed, apart from being sad the house was dark and there was always tension in the air between the three of them. As soon as I could I would escape and play with the local kids until it was time to go home unless it was raining and I was forced to stay inside.

It’s very easy as a young boy to say you don’t like people without knowing why these people behave towards you the way they do. Gran always seemed to be in a bad mood and cruel, she was always scolding my Granddad Michael. He would be in his late seventies sitting in his chair beside the cast iron range, cap on his head and pipe in his mouth rocking back and forth never speaking to anyone. The only sound he ever made was when he slurped his tea from a saucer through his moustache.

Gran (Lizzie) was always on his back to do something or go for a walk. Truth was he had no friends left and she wouldn’t give him any money to go for a pint or whatever. As was the case in those days the woman of the house held the finances and Lizzie held on to hers with a very tight grip. I never really got to know him but did feel sorry for him.

I was treated in a similar way: ‘Little boys should be seen and not heard,’ she continually reminded me whenever I tried to say something. If we were having tea I was never allowed butter and jam on the same piece, it was one or the other. Chocolate biscuits were for adults, plain ones for children! Very seldom did I ever see my aunt and other uncles visit the house. I think they were glad to be away.

Uncle David was my godfather, an alcoholic, usually smelling of drink, and overbearing. Later in life I found out why. He was near fatally wounded at El Alamein during the Second World War and left for dead until someone spotted his arm moving. His wounds were life changing in that half his jaw was blown away, along with other more sensitive parts. His jaw was noticeably repaired using skin grafting and was two different colours. The other injuries meant he could never marry, and he turned to alcohol.

My Uncle George who was the youngest brother lost his life during the communist uprising in Malay, apparently in a drowning accident at Port Dickson, leaving a wife and young children.

One day my granddad, who’d had enough of Lizzie’s vicious tongue, went out for a walk to get some peace. It was a very windy day and as he walked under the narrow bridge at Hamiltonhill a gust of wind blew his frail frame off its feet and he broke a leg. Unfortunately at his age he never fully recovered, contacted pneumonia and died at home soon afterwards.

Grandmother seemed to go downhill after that, she was diagnosed with Type 2 diabetes and had a leg amputated. This meant visiting twice a week. When she passed away, my Uncle David fell into some bad company and drunk himself to death. None of the family could help him, he was probably beyond help.

As children we never fully appreciate what the older generations had gone through until we’re old ourselves and by then it’s too late. Michael and Lizzie were born in 1875 and 1878 respectively, married in 1900, came from large families and lived through poverty, the depression, two World Wars and lost two sons; one on the other side of the world and another as a result of war.

Looking back I can now say I didn’t dislike the visits, I was probably just apprehensive because of my youth and misunderstood what was really behind the façade of these old people. They were protecting their secrets and their way of life and that was all they understood. Perhaps if there had been less of, ‘Being seen and not heard’, I may have had a better understanding of them but I doubt it.