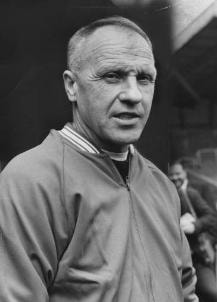 Scottish footballer and manager Bill Shankly was born on 2 September 1913. ...

Scottish footballer and manager William (Bill) Shankly was born on 2 September 1913 in Glenbuck, a mining village on the border of Ayrshire and Lanarkshire. Shankly was the youngest boy of ten children and five of the ten boys in the Shankly family played football professionally, with Bill Shankly eventually being capped for Scotland seven times.

After leaving school at the age of fourteen, Shankly followed many of his contemporaries into a career in mining and was signed by Carlisle United within weeks of becoming unemployed when the mine where he was working closed. Prior to this, he had played for his village team the Glenbuck Cherrypickers.