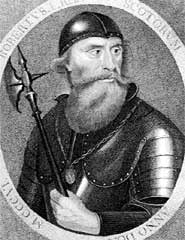 Henry de Bohun, an English knight, was killed at the Battle of Bannockburn by Robert the Bruce on 23 June 1314.

Robert the Bruce killed the English knight Henry de Bohun on the first day of the Battle of Bannockburn on 23 June 1314.

De Bohun was cut down when he attempted to charge Robert the Bruce after spotting him at the start of the battle holding only a battle axe. De Bohun charged at the king, who stepped aside on his horse, then stood up in the stirrups to aim a fatal blow at De Bohun's head. This episode of the battle was described in great detail by H E Marshall in Scotland's Story.

The piety of Robert the Bruce