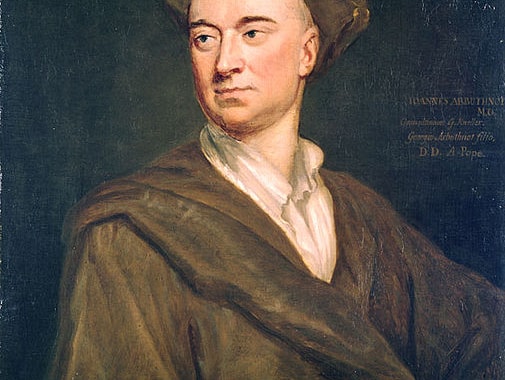 Mathematician John Arbuthnot, the man who popularised the 'John Bull' character, died at the age of 67 on 27 February 1735. Arbuthnot was a physician, mathematician and author and was a co-founder of the Scriblerus Club which satirised 'abuses of learning'. The club's members included Jonathan Swift, Alexander Pope and John Gay.

Arbuthnot moved from his birthplace of Kincardineshire to London in 1691, at the age of 24, and initially supported himself by teaching mathematics. Within ten years, he had become a popular figure at court, acting as Queen Anne's physician. John Bull first appeared in a series of pamphlets including Law is a Bottomless Pit (1712) by Arbuthnot, which satirised England's wars with Europe.

John Bull was first portrayed as an English countryman with a sister Peg (intended to represent Scotland) and an adversary - Louis Baboon - of the House of Bourbon, France. The character was soon adopted by other writers and satirists, including George Bernard Shaw, author of John Bull's Other Island.

The Life and Works of John Arbuthnot by John Atherton Aitken.