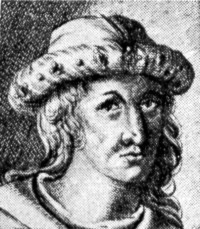 King Robert III of Scotland died at Rothesay on 4 April 1406, after hearing of the capture of his young son James by the English. The young James was kept captive for eighteen years, and later ruled as James I of Scotland.

Robert III came to the throne in 1390, at the age of 53 and reigned for sixteen years. He was buried at Paisley Abbey and centuries after his death, Queen Victoria paid for the construction of a memorial to him.

Kings and Queens of Scotland by Richard Oram