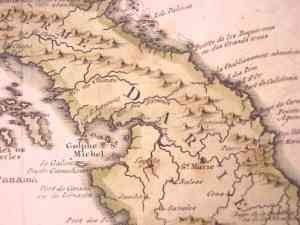 A fleet of five ships set sail from the Port of Leith for the Isthmus of Darien in Panama on 12 July 1698, beginning a sea voyage which would last more than three months.

The ships were launching the Darien Scheme, a project which aimed to establish a Scottish overseas colony in the New World to rival those of England and Spain. The scheme was to prove a disaster and within seven months, two thirds of the original 1,200 voyagers were dead and the decision was made to abandon the colony.

At least a quarter of Scotland's collective wealth had been tied up in the scheme, causing the ruin of dozens of businessmen and landowners who had invested in the project.

The success of the Darien colony was compromised by an unfortunate combination of circumstances - the existing communities of the area refused to trade with the Scots, the settlers were plagued by diseases such as dysentry and lacked sources of food and fresh water, causing the community to become demoralised. The colony was abandoned in July 1699, less than a year after it had been settled, with all the settlers leaving, with the exception of six men who were deemed too ill to last the voyage.

QUICK LINK: Read research on Darien in this back issue of History Scotland