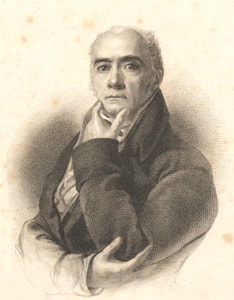 On 4 March 1756, artist Sir Henry Raeburn was born in Stockbridge, Edinburgh. Raeburn was orphaned at a young age and educated at Heriot's Hospital, after which he was apprenticed to a jeweller. Here, he showed early signs of his talent, producing miniature paintings to decorate pieces of jewellery.

One of Raeburn's earliest portraits was of Anne, the daughter of the wealthy Peter Edgar of Bridgelands, who would soon become his wife.

Raeburn was knighted by King George IV in 1822 and among his many celebrated portraits are paintings of:

Henry Raeburn died on 8 July 1823 at the age of 66 and is commemorated by a memorial at the church of St John the Evangelist in Edinburgh.