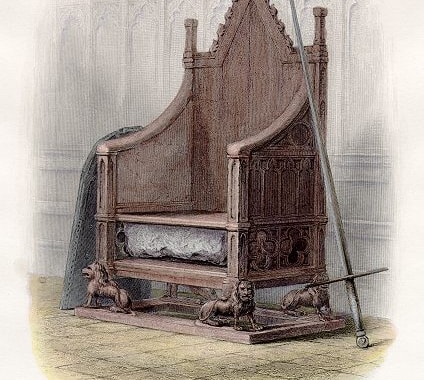 The Stone of Destiny was returned to Scotland from Westminster Abbey on 15 November 1996. ...

The Stone of Destiny was ceremonially returned to Edinburgh on 15 November 1996, from Westminster Abbey, where it had been installed by King Edward I 700 years previously, in 1296. The stone had previously been taken from the Abbey by students in 1951, who removed it by car back to Scotland, before it was found after four months and returned to London.

On 30 November 1996, fifteen days after the return of the stone, thousands of people lined the Royal Mile in Edinburgh to watch troops escort the stone from Holyrood Palace up to Edinburgh Castle. The stone was received by Scottish Secretary of State Michael Forsyth, who received it from Prince Andrew, representing the Queen.

Read our expert guide to the history of the Stone of Scone.