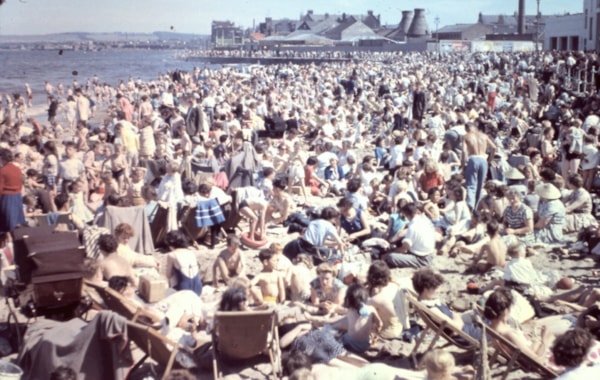 Author Jack Gillon explores memories of the seaside resort of Portobello, popular for its sandy beach and outdoor pool with wave machine. ...

Author Jack Gillon explores memories of the seaside resort of Portobello, popular for its sandy beach and outdoor pool with wave machine.

In the 1950s, when air travel was strictly first class, a holiday abroad was expensive and only a dream for most people. Few people had cars and a holiday closer to home was the most that many people could manage. In Edinburgh, the local resort of choice was Portobello - a cheap and easy tram ride away for most.

READ MORE: Glasgow in the 50s

Portobello, Edinburgh's ‘bracing seaside resort’, with its promenade, wide sandy beach, fun fair, donkey rides and massive open air swimming pool was a thriving holiday resort at the time - the perfect setting for an enjoyable family day out.  Popular with Edinburgh residents and visitors from Glasgow during the trade holidays – it would be standing room only when the sun came out.

Portobello Bathing Pool, famous for its distinctive Art Deco design, lofty diving boards, artificial waves and chilly waters, was Portobello’s main attraction for over 40 years. The pool, which opened in 1936, was the largest outdoor facility of its kind in Europe.

The Pool was enormous; 330 feet long by 150 feet wide – the equivalent of two Olympic sized pools. It varied in depth from one foot to six feet two inches at the deep end. 6,000 spectators could be accommodated, with 2,000 seats available under a cantilevered stand, and there were lockers provided for 1284 swimmers. The 1.5 million gallons of water required to fill the pool was filtered from the sea and heated to a temperature of 68 degrees Fahrenheit by steam from the adjacent power station - though most accounts of the water temperature ranged from icy cold to sub-Siberian.

The pool's great innovation was the first ever wave-making machine in Scotland. This consisted of four 24-feet long pistons mounted in a chamber at the deep end of the pool, which were arranged to send 3-feet high waves in three possible directions. These artificial waves were so dramatic that the machine was only operated after a warning on a klaxon had been sounded.

The Pool was closed for six years during World War Two and had to be camouflaged to stop it being used as a landmark by enemy planes. It re-opened in June 1946 and, unperturbed by the icy water conditions, the 1950s saw visitor numbers soar during the summer months with the queue to gain entrance often stretching the full length of Westbank Street. In the early part of the decade Sean Connery could be found at the Pool acting as a lifeguard.

By the end of the decade, Portobello’s popularity had waned as cheap package trips abroad became more readily available and people looked for more exotic locations for their holidays. The Pool fell into a long and controversial decline, with the closure of the power station in 1978 removing what little heat there was for the water. The 1979 season turned out to be the last and demolition was finally approved in 1988.

Jack Gillon is co-author of Edinburgh in the 1950s: Ten Years That Changed a City published by Amberley Publishing.