An illustrated prayer book featuring a poem handwritten by the young Mary Queen of Scots, is to go on display at the National Museum of Scotland from 31 March 2022.

The manuscript Book of Hours, which will be on show until 3 August 2022, originally belonged to Mary’s great aunt, Louise de Bourbon, Abbess of Fontevraud (1495-1575). The teenage Mary composed the touching four-line verse in French in the late 1550s, around the time of her marriage to the Dauphin Francois. She signed it with the motto ‘Va tu meriteras’ (Go, you will be deserving), and her monogram, combining her initial ‘M’ with the Greek Φ, the phonetic representation of ‘F’ for François. The translated poem reads:

Since you wish to remember me here

in your prayers and devout orations,

I ask you first that you remember

what part you have in my affections.

Dr Anna Groundwater, Principal Curator, Renaissance and Early Modern History at National Museums Scotland, said: “It is wonderful to be able to display this rare, jewel-like book. It’s particularly moving to see the young Mary, writing in her best script, to one of her closest relations in her mother, Marie de Guise’s absence. She had had to remain in Scotland when Mary came to the French court in 1548, so Mary was particularly dependent on her mother’s relatives for comfort and support. This poem therefore reflects the intimate bond with her great-aunt Louise.”

QUICK LINK: FOR HISTORY AND ARCHAEOLOGY NEWS, REGISTER FOR THE HISTORY SCOTLAND NEWSLETTER

Written in Latin on vellum, the book contains 40 exquisite illuminations by a Master artist (fl. 1525-46), associated with Archbishop François de Rohan. It would have been used for private worship, and it is believed that the Abbess gave this precious volume to Mary. It is on loan to National Museums Scotland from The Pininski Foundation, Liechtenstein, for the duration of the display. 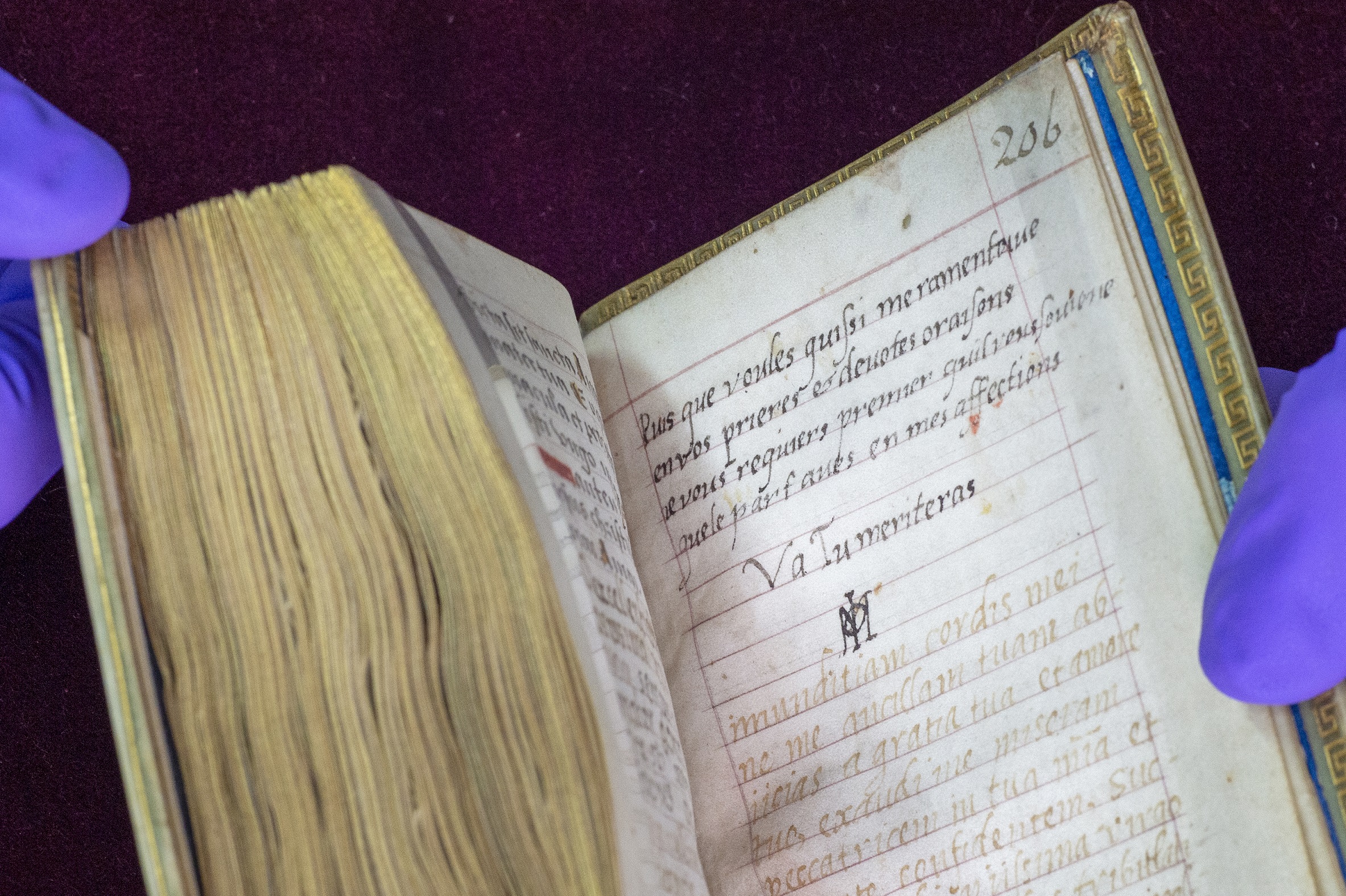 Count Peter Pininski said: “There is a real fascination across Europe with the great figures of Scottish history, like Mary Queen of Scots and Charles Edward Stuart. I am very pleased to be able to share this wonderful treasure and I hope many people will go to see it in the National Museum of Scotland.”

Over the course of the display, six different pages within the Book of Hours will be shown, with a new page displayed every three weeks, giving visitors the opportunity to see multiple pages. It has also been fully digitised and a QR code will enable visitors to scroll through the pages and view some of the illustrations. These images will also be accessible on the museum’s website.

The prayerbook will be exhibited in the Kingdom of the Scots gallery alongside other objects on permanent display linked to Mary Queen of Scots, including the Penicuik Jewels, recently returned from a major exhibition at the British Library, Elizabeth and Mary: Royal Cousins, Rival Queens, and a replica cast of her tomb.

For opening times, visit the National Museum of Scotland website.