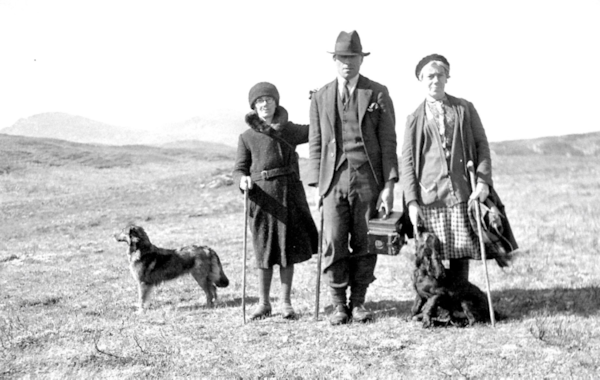 Margaret Fay Shaw left the world a fascinating collection of images and invaluable film of a lifestyle which no longer exists. She not only took film and photos in the Outer Hebrides but also on the Isle of Canna, where she lived with her husband, fellow folklorist John Lorne Campbell, from 1938 when they bought the island, until her death at the age of 101 in 2004.

This film collection was recently re-digitised by the National Trust for Scotland, who have cared for the island since 1981, to ensure its preservation for years to come. In the process of carrying out this work archivist Fiona J Mackenzie uncovered some previously unseen film, including footage of such historically important events as the first plane landing on the Cockle Strand on Barra, 1936.

Solas uses Margaret’s images, films and words to tell the story of her life and the people in that life. Using two broadcasts which Margaret made for the BBC in the 1950s and the words of her close friend and companion, Basque born Magda Sagarzazu, their own recorded voices tell how their lives were affected by the islands, the people, the animals, crofting, the birds, the songs and the sounds.

The film also uses samples from the sound archive recorded by John Lorne Campbell during the 30s and 40s in the Hebrides, primarily Barra, South Uist, Eriskay and Canna.

Using the old to create the new

During the production of the film, Fiona was keen to demonstrate how an archive can also inspire new and current creative work. Lewis piper, James Duncan Mackenzie, was commissioned to produce a new soundtrack for the film, inspired by watching the films and responding to them. James and his musicians spent a week in Canna House, using the films to produce a suite of new music. The Canna House front door, the Canna Steinway piano, John Lorne Campbell’s bugle, Margaret’s typewriter and the servant’s bells all make an appearance in the music.

Fiona said: “I am delighted that we have been able to produce this lovely piece of work, to profile the work of an incredible woman who had the foresight to save for the world today, a piece of Scottish lifestyle which would have otherwise disappeared.

“It is only right that the film is premiered in the middle of the community which took Margaret to their hearts and were so generous with their time, language, love and culture. Margaret said that Uist was the place ‘where she was loved the best’ and we hope that this will be evident in the film. South Uist was where I personally first studied the songs collected by the Campbells and I am pleased to be able to give a voice and vision to Margaret’s work.

“We are very grateful to the National Trust for Scotland USA Foundation for making this project possible and also for the opportunity to prove that archives can be a living entity, not merely a collection of boxes on the shelf.

“All of the people involved in the production, the editor, the musicians, the studios, have been inspired by the work of Margaret and John Lorne Campbell and all are keen to continue this work, using the wonderful resources contained in Canna House today, to celebrate the life and work of these two incredible people. John and Margaret Campbell would be delighted that we are using the old to create the new.”