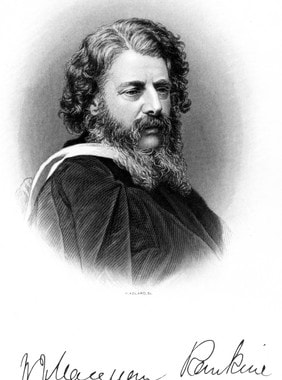 On 5 July 1820, Scottish scientist William Rankine was born in Edinburgh. Rankine specialised in thermodynamics and his detailed knowledge of the workings of steam engines was sparked by work he carried out as a teenager during study breaks, at the Edinburgh and Dalkeith Railway where his father worked.

As well as developing the Rankine Cycle, which used the new theory of a condensing vapour inside a steam engine, Rankine was able to put his ideas on heat radiation into practice during a visit by Queen Victoria to Scotland - when he lit a huge bonfire on Arthur's Seat to welcome the monarch - which at the same time allowed him to test an experience with using air passages under a fuel source.