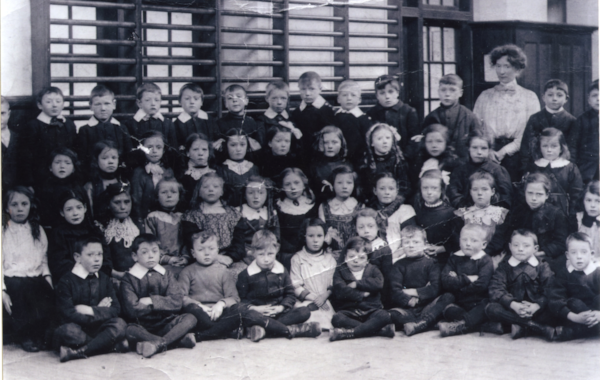 Genealogist Margaret Hubble tells the fascinating story of a court case in which a schoolmaster was called an 'old fool' and a 'liar' by a school board treasurer - a great example of the treasures to be found in education records.

Several newspapers [1] reported on a case of slander, which was heard at the Court of Session in Edinburgh on 21 July 1875. James Johnston Brown, the pursuer, a schoolmaster at Torphichen, West Lothian, sued William Bruce, treasurer of the School Board, for £500 damages in respect that Bruce had called him a liar. Bruce admitted calling Brown “an old fool” and “an old blockhead” but denied the allegation of slander. James Johnston Brown was age 68 when the incident occurred [2[, and William Bruce [3] was age 55.

James Brown had been the certificated schoolmaster at Torphichen for 20 years, but had been a teacher for 35 years, whereas William Bruce was employed as the clerk and treasurer to the School Board for Torphichen, as well as being inspector of the poor of that parish - a person of considerable importance in the area. It was alleged that on 26 February 1875 at the public school and in the hearing of 14 pupils, Bruce had called Brown an “old fool”, an “old blackguard” and a liar.

The Government’s inspection of the school had taken place on 21 December 1874, the report of which, published in February 1875, was extremely creditable to the success of Brown’s efficiency as a teacher. On the morning in question, Bruce had arrived whilst Brown was teaching, stating that the object of his visit was to obtain the average number of pupils attending the school and this was duly given to him. The teacher had been delighted with the Board report on the school, but it was alleged that Bruce had then intimated that the Government grant had been reduced in consequence of fees not being properly collected. Mr Brown explained that he hadn’t thought the collection of fees was really his duty, although he did his best to achieve this. Pupils had only reassembled after the holidays, when the return was made, and he hadn’t had time to collect the arrears.

But the inspector had referred him to a minute of the School Board requesting him to collect fees, saying that if Brown said he was not the cause of the loss of £10, he was a liar. A scene had followed, offensive words allegedly used by Bruce, resulting in this case being brought to court, with Brown’s standing as a teacher having allegedly been damaged. After all, to hear a schoolmaster being criticised in front of his scholars by an official of the School Board could well have had a most detrimental effect on his reputation. Upwards of 70 scholars had been present at the school and one could only imagine them going home to relate to their parents the astonishing scene which had taken place! Fourteen pupils had given statements corroborating the teacher’s evidence and the jury did find in favour of Brown. The Lord Justice Clerk had recommended, however, that damages of only one farthing be awarded (the smallest coin available) and each party had to pay his own expenses.

The Education (Scotland) Act 1872 introduced compulsory education for all children aged between 5 and 13, with poverty no longer being an excuse for truancy [4]. The exclusive use of the English language was also authorised, with Gaelic being barred. Existing parish and burgh schools were taken over by the state, being managed by locally elected School Boards. The new system was co-ordinated nationally by the Scottish Education Department, with the teaching of reading, writing, and arithmetic (the three ‘Rs’) being the core part of the curriculum. Churches handed over their schools without charge to the School Boards.

The National Records of Scotland (NRS) in Edinburgh holds many records relating to education, schools and teachers, but rarely on individual pupils, unfortunately. The surviving records of burgh schools are normally held with other burgh records [5] by the local archive offices or in the national archive collections. Older records of local authority schools can be found at local archives and mainly comprise schools’ admission registers (which may give some information about individual pupils) and headmasters’ log books.

Records of individual kirk sessions [6] may contain information relating to schools and teachers. Records relating to school inspection reports at NRS [7] contain details such as a numerical breakdown of the number of pupils and teachers, and the number and size of the classrooms. Sometimes personal details about specific teachers are included, such as their age, period of service, qualifications and former employment.

In the case of Brown versus Bruce, no 1875 Inspection Report for Torphichen School survives, unfortunately. Information for the 1848 inspection report [8] includes details about the school’s structure (walls 2 feet thick, slate roof, sizes of rooms) and that it contained a teacher’s bedroom, parlour and kitchen, as well as the classrooms. The teacher’s salary was £20 per year (with income from annual voluntary subscriptions). The school was open to all denominations.

The 1934 report includes, “Since April 1933 this school has never been entirely free from epidemic sickness in some form or other and irregularity of attendance arising therefrom. To this cause, in some measure, may be attributed the unsteadiness shown by the lowest classes in much of their work. Writing promises well, and arithmetic and recitation are fairly good; but revisal of earlier lessons is advised in order to secure greater confidence in reading throughout the infant course; and spelling is backward.”

The 1937 report includes, “On the whole the work of the 3 classes which occupy the lowest room progresses favourably. Items in such recreative subjects as music and poetry, combined with simple drama and mime, are rendered in very pleasing fashion. In the highest class, junior 1, the results in reading and spelling are mainly satisfactory. Arithmetic reasonably good, but steps should be taken to eliminate counting by units”. The report concludes with a rather scathing comment about the children’s’ speech! “While most of the children throughout the school speak with a fair degree of correctness, some of the senior boys are guilty of faulty articulation; purity of vowel sounds and pronunciation of final consonants should be insisted upon.”

These records help us to understand what it may have been like to attend school at various times in Scotland.

Margaret Hubble is a professional genealogist and a member of the Association of Scottish Genealogists and Researchers in Archives. Her research covers the whole of Scotland and you can find out more about her work on her website YourScottishFamilyTree.