Shetland and the First World War: heroes and heroines remembered The First World War was “the war to end all wars,” so the saying goes, but as we all know, that was not the case. Estimations for those who died vary from between 15 to 22 million military personnel and civilians, along with a further 23 million fighting men who were wounded, making it one of the deadliest conflicts there has ever been.

Because of ideas such as “pals battalions,” where men from the same, town, village or work place, would go off to war and fight alongside each other shoulder to shoulder, some communities lost their entire male, adult population in just one single action on the battlefields of Western France. This affected communities all over the United Kingdom with devastating effect.

In this respect Shetland was no different. The war memorial in Lerwick, opposite the Town Hall, records the names of 517 military personnel and 119 civilians who lost their lives as a direct result of their involvement in the First World War. But that doesn’t mean there are not even more names that are missing from it; men who lost their lives and who had a connection to the islands, but for no particular reason their names were simply left off of it. 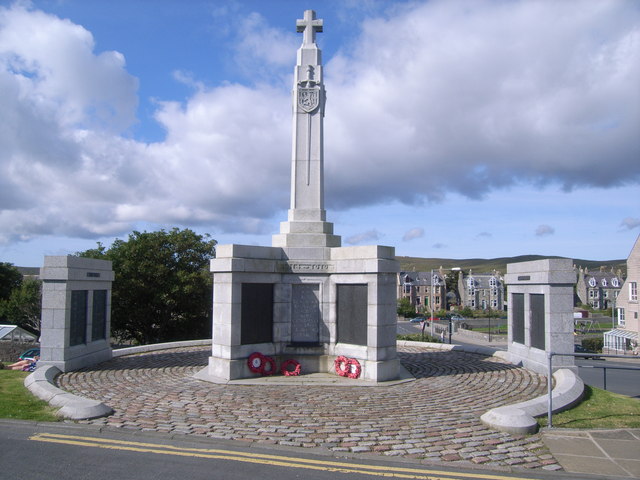 Maybe it was because of nothing more than that they were born on the islands but left before the war began. The names on the memorial at Lerwick, are only as complete as the information that was supplied and collected at the time, as was the case with memorials across the nation.

It is estimated than somewhere in the region of 6,000 men from the Shetlands served in the British military during the First World War, many of whom returned to their homes and families. These would have been difficult times for all concerned, because many of those who returned were not the same as they had been when they left to go off to war. Husbands and wives who had not seen each other, sometimes for years, had to get to know each other all over again, which wasn’t always easy when the men in some cases were nothing more than shadows of their former selves, because of what they had witnessed and had to do.

Help from the Home Front

Those who remained on the Home Front throughout the islands also did their bit for the war effort. Many took part in the national egg collection for wounded soldiers. Throughout the war some 41 million eggs were collected, with most being sent to base hospitals in France and Belgium, but those collected throughout the Shetlands were sent to the 1st Scottish General Hospital in Aberdeen, a military establishment that catered for both officers and men and was spread across several locations which included the city’s then High School for Girls.

Some of the Shetland Islands women belonged to the Queen Mary’s Needlework Guild who, throughout the war, knitted somewhere in the region of 15,000 items, mainly jumpers and socks for the UK’s fighting men.

An important aspect of the First World War to mention is all of those who took part in the war, in whatever capacity. Historians always make mention of those who became casualties of the war, and by paying the ultimate price, have their names commemorated on local war memorials, such as the one at Lerwick.

Those who carried out work on the Home Front get a mention, but not so much is written about those who went off to war and made it back home. They were just left to get on with their lives as best they could, with most never talking about their experiences ever again, because even the memories were simply too painful.

Here is some information on just a few of the men from the Shetland Islands who paid the ultimate price so that their fellow countrymen could remain free from Nazi tyranny. Their stories are representative of all of the brave men from the Shetlands who left their families and communities behind them to go off and fight in the war.

Samuel Anderson was born in Eastwick, Ollaberry, North Mavine, on 14 November 1890, to Charles and Christina Anderson. In 1910, Samuel moved to Australia where he begun working as a farm hand, but when war broke out ,he enlisted in the Australian Army, becoming Private 997 in the 2nd Battalion, Australian 1st Infantry Division.

He was sent out to Cairo with his Australian comrades and was killed in action during fighting of the Dardanelles campaign. According to De Ruvigny’s Roll of Honour, 1914-1919, he was killed in action on 15 April 1915, but the Commonwealth War Graves Commission website records his death as having taken place on 2 May 1915. He has no known grave, but his name is recorded on the Lone Pine Memorial.

John Kennedy Cameron was born on 4 April 1886, in Lerwick. In the years leading up to the war he worked as a ships steward, but when hostilities broke out, he enlisted in the British Army on 12 August 1914, and arrived in France on 1 May 1915. One year after having enlisted, he was dead.

John Kennedy Cameron was a Private (1877) in the 1st/6th (Renfrew) Battalion, The Black Watch (Royal Highlanders), a Territorial Force. During fighting at La Boiselle, near Albert, Private Cameron was going to the assistance of a wounded comrade when he too was shot and wounded. He died later the same day of his wounds at a nearby Casualty Clearing Station and was buried in the St Acheul French National Cemetery, at Amiens.

His Captain wrote of him: “I found Private Cameron at all times most valuable, and as well as being a good soldier, he was always cheery, and helped to keep up the spirits of those about him. He died a noble death, receiving his wounds while attending a comrade in distress.”

His widowed mother, Robina, was granted a total of £5,10 shillings in pension and war gratuities as a result of her son’s death.

Alexander Mundell Sandison was born on 25 September 1892, in Mandeville. His father, John Sandison, was a local Justice of the Peace. Sandison was educated at Watson’s College in Edinburgh, and went on to become a Flockmaster. Keen to “do his bit” he enlisted in the Lothian and Border Horse in September 1914, before crossing the English Channel in October 1915, as part of the British Expeditionary Force.

Whilst in France he obtained a commission as a 2nd Lieutenant in the 1st Battalion, The Royal Marines in September 1916. He was wounded on 18 February 1917, during fighting round Miraumont, on the Ancre, and died of his wounds at a military hospital in Rouen, ten days later. He was buried in the St. Sever Cemetery, Rouen.

Sandison’s colonel wrote a letter to his parents:

He had acted so gallantly throughout the attack, and was only struck down after the position that we had captured had been made secure. Your son was of the very great assistance to me, and he was quite of my best officers. I placed great reliance in his judgement, and I knew that he was full of pluck. As an officer his loss to the battalion is very great; he combined great determination with a genial personality. With deepest sympathy from all ranks of the battalion.

In closing, I thought it would be good to show it wasn’t just the Shetland men who got to wear military uniforms during the course of the First World War. The following four women, all of whom were born in Shetland, served in the Queen Mary’s  Army Auxiliary Corps (QMAAC), which had originally been the Women’s Army Auxiliary Corps (WAAC). 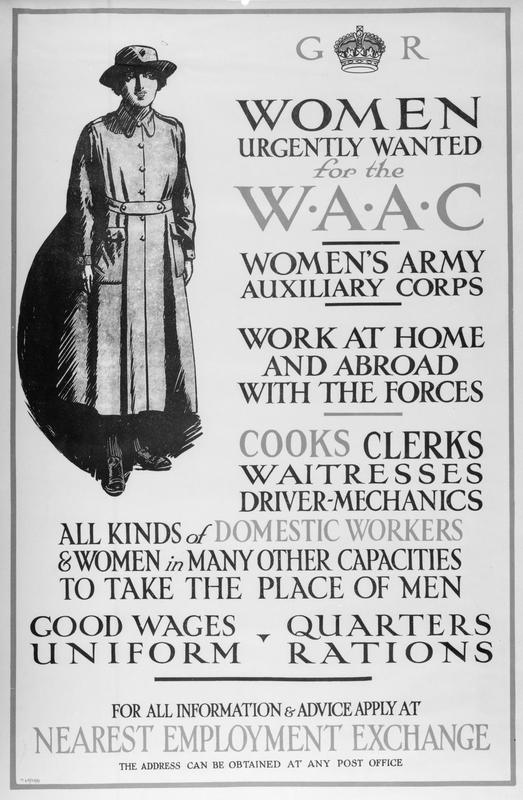 Ministry of Labour poster for the Women's Army Auxiliary Corps

Annie Campbell (39001) was born in Lerwick on 22 March 1895. After leaving college she found work as a clerk in a grocer’s store. During the First World War she enrolled in the QMAAC on 30 April 1918, as part of the Depot South Lancashire Regiment and was stationed in Warrington. She was discharged from the service on 28 October 1919.

She took up the British governments option of free passage to the Colonies, which included Australia, where she set up home in South Preston, Melbourne, Victoria, having arrived there in the summer of 1920.

Alice/Aleceena Robina Nicholson (1872), who was born in Yell on 21 October 1895, enlisted in the WAAC on 18 July 1917, in London, and less than three weeks later, on 6 August 1917, crossed the English Channel and arrived in Boulogne. Whilst there she spent some time at the notorious British Army’s coastal training camp at Etaples in Northern France.

Prior to her wartime service she had worked as a “general servant” at the Royal Hotel in Edinburgh. On her enlistment “Identification Certificate” she is described as being single, “5 feet 7 inches in height,” having “blue grey coloured eyes, very light brown hair,” and her build was described as being, “broad, well made.”

Aleceena Nicholson was demobilized in December 1919.

Between January and July 1918, Agnes spent her time attached to the 6th (Reserve) Battalion, Royal Field Artillery in Dalkeith. She was discharged from the Corps on “compassionate grounds” on 29 March 1919.

Mary Phyllis Jamieson was born in Cunningsburgh on 7 May 1899. In June 1918, she applied for enrolment in the Women’s Army Auxiliary Corps. One of the individuals she gave as a reference was the Reverend Simpson Wallace, the priest at Cunningsburgh, whom it would appear she had previously worked for as a cook.

Part of the application form under the heading of “General Health” included 5 questions. Question number 5 was in three parts: ‘Are your periods regular? Date of last period? Does your period interfere with your work?’ How times have changed.

Her time in the WAAC lasted from when she was stationed at the Edinburgh Depot on 31 July 1918 and 21 October 1919, when she was discharged. Her last posting was with the 2nd Battalion, Cameron Highlanders at the Dreghorn Barracks in Edinburgh.

The work of the WAAC

The WAAC having been established in 1917, was renamed Queen Mary’s Army Auxiliary Corps after Queen Mary gave the organisation her patronage in 1918, before eventually being disbanded in September 1921, nearly three years after the end of the war. The majority of the work that women of the Corps undertook was connected with administration, catering and store work. Throughout the course of the war more than 50,000 women had volunteered to work in the Corps both at home and abroad, 81 of whom were killed. Five women were awarded the Military Medal for their war time service.

Stephen Wynn was born in Leeds, England in 1958. His father was English and his mother was Irish. For thirty years he served as a Police Constable with Essex Police and in 2010 he penned his first book, Two Sons In a War Zone: Afghanistan: The true story of a father’s conflict. His latest book is The ‘Shetland Bus’: Transporting Secret Agents, published by Pen & Sword Military.