Using Gaelic language and stories, customs and traditions, and 200 years of history, we bring the Gaelic way of life alive for our visitors.  A part of the Nova Scotia Museum system, we are operated locally by the Nova Scotia Highland Village Society with a 43-acre property and twelve period buildings representing Gaelic Scotland and Nova Scotia.  Interpreters, dressed in clothing appropriate to each time-period will tell you stories of their lives

Visit the museum website for a taste of what you will experience on site. 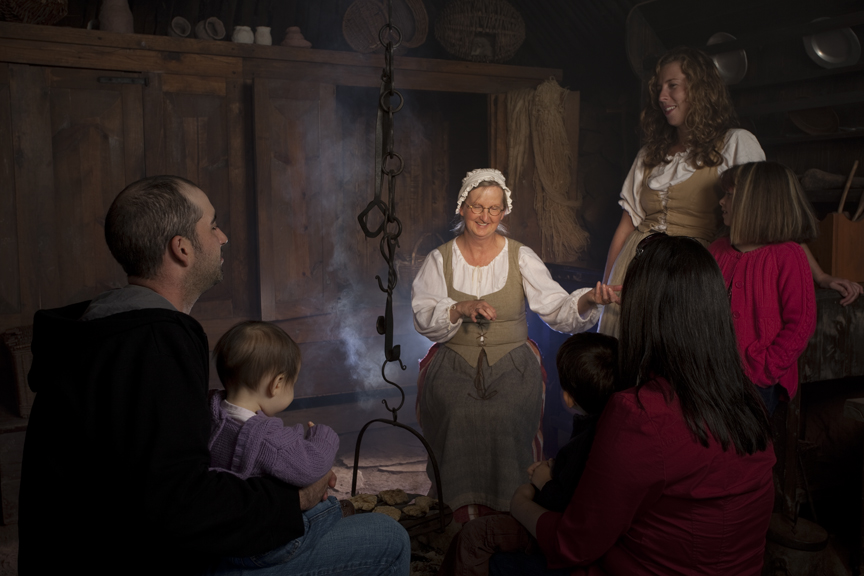 We also offer genealogy services for visitors whose ancestors may have been from Eastern Nova Scotia and Cape Breton.  Through our fee-based Roots Cape Breton program, researchers can hope to find more information about their ancestors.   We use online, published genealogies and unpublished manuscripts in our collection to aid our searches.  Research may be done in-house or contracted and sent out by email.

Our library holds books and manuscripts about Cape Breton, Nova Scotia and Scotland and is available for in-house research. We have a growing audio and video collection of music, Gaelic language speakers and Gaelic sessions to preserve and protect our language and stories.

One Gael who came to Cape Breton with his family in the 1820s was Aonghas mac Dhòmhnaill 'ic Chrìsdein | Angus, son of Donald, son of Christopher MacDonald. Angus was styled as An Saor Mór, the Big Carpenter. The family lived in Càirinis, Uibhist a Tuath | Carinish, North Uist. Circumstances were changing for Gaels in Scotland.  By 1827 many people in North Uist were aware that making a living from harvesting kelp was uncertain with the end of the war with France and the influx of cheaper products. They made the hard decision to emigrate, and arrangements were set with a vessel to sail out the next year..

The Commerce sailed for Cape Breton in 1828. Angus, his wife Mairead | Margaret and eight children, the youngest nine months old, along with many friends, relatives and neighbours left for Cape Breton. They paid for their passage and arrived in Sydney, Cape Breton in August of that year. Because it was too late to plant, the ship took them up the Bras d’Or Lake to West Bay, where other friends and relatives had settled. They stayed the winter and then set out to find land not far from West Bay that came to be known as Loch Lomond. Angus and Margaret had two more children after they arrived. Angus and Margaret had two more children. Descendants are found in many places. I am a descendant of the nine month-old child, Catrìona | Catherine, who survived the journey at sea.

Catherine married Alexander MacDonald, their daughter Margaret married Dòmhall an Tàillear | Donald (Tailor) MacDonald, and my grandfather was Tormod | Norman, and my mother was Eilidh/Edith, daughter of Norman. I am the sixth generation of Angus’ family to be born in Cape Breton. A group from group from Uibhist a Tuath | North Uist visited the village after I started working there. We got to talking family and I mentioned I was descended from the Big Carpenter. One person said “Oh I know the Big Joiner; he arranged the ship and told the people to sell everything they could to pay passage. Angus knew things were going to get worse for them and leaving was the only opportunity".

Baile nan Gàidheal /Highland Village is open for the 2022 season until 15 October and will reopen in June 2023. Hours: daily 10am-4.30pm. Watch the webcam here.