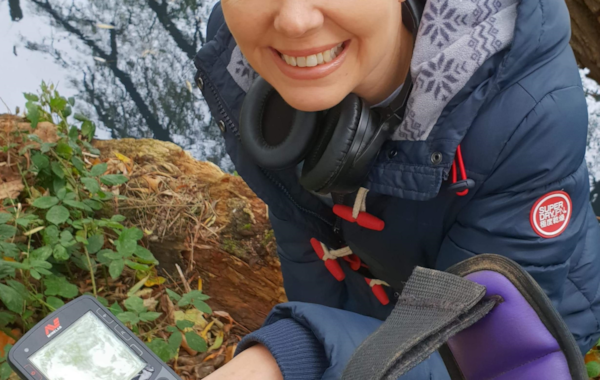 Michelle with the armorial ring

A 17th-century gold armorial ring found by a metal detectorist who has also discovered a rare Richard III of England coin is expected to fetch around £10,000 at auction in September.

A 17th-century gold armorial ring found by a metal detectorist who has also discovered a rare Richard III of England coin is expected to fetch around £10,000 at auction in September.

Dix Noonan Webb's Antiquities specialist, Nigel Mills, noted: “We were very pleased with a strong result at the auction today, the ring selling above top estimate to an American private collector, who was delighted to be the successful bidder.”

The finder, Michelle Vall, started the hobby of metal detecting just over two years ago, and on a trip to Loch Lomond in Scotland last November, 'struck gold' with the discovery of a beautiful ring engraved with a family crest.

Found at Ducks Bay, on the shores of the lake, she declared the ring as Scottish Treasure Trove to the National Museum of Scotland, Michelle was then told in June of this year that the museum did not want to purchase the ring, which they said was 16th or 17th century in date. Surprised but delighted to have the ring returned to her Michelle then contacted auctioneers Dix Noonan Webb (DNW).

The story behind the ring

DNW have further researched the ring and discovered that the crest belonged to the Colman family of Brent Eleigh, Suffolk, who used the arms on the bezel of the ring from 1598 and this ring is thought to date from 1640-80. This crest can be seen prominently displayed on the ledge slab of the tomb of Samuel Colman (1569-1653) in the parish church of St Mary, Brent Eleigh and and atop the Brent Eleigh village sign post.
QUICK LINK: Free Mary Queen of Scots download when you sign up to our free newsletter
The Colman family made their fortune in the mid 16th century from the cloth trade, in the Suffolk town of Lavenham. The family invested their wealth into land, and in 1607 Samuel Colman purchased the manors of Brent Eleigh and Fennhall, and the family rose to rank amongst the Suffolk gentry. Samuel’s second son Thomas was a devout clergyman in the protestant faith in the village of Brent Eleigh; however Thomas’s only son Edward became a convert to Catholicism and had a reputation as an effective proselytiser of his new faith, gaining a number of converts. 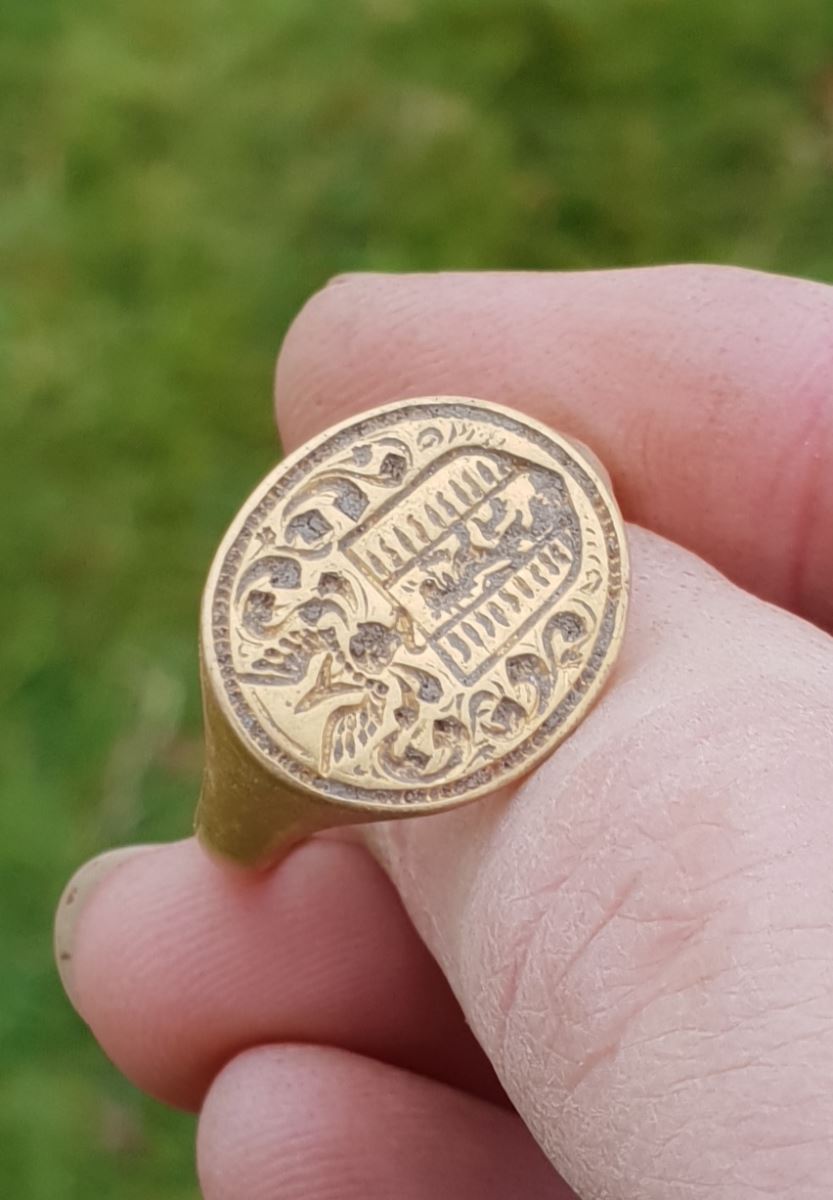 Edward also had high political ambitions for himself, which began in 1661 when he established himself at court, being sworn in as a ‘Gentleman Pensioner’, acting as a bodyguard to the King. By 1673 Edward had been appointed Secretary to fellow Catholic, Mary of Modena, wife of James, Duke of York, the younger brother and heir presumptive to the Protestant King Charles II.
During the end of the 1670s James and Mary had been living in Edinburgh and in 1680 the King made James Commissioner for Scotland. The 17th century remained a period of high tension between Protestants and Catholics, and Edward undertook approaches on behalf of the Duke of York (whether authorised or not) to both the Papacy and the Catholic French court, trying to gain support and funds to reduce James’s reliance on the anti-Catholic parliament.
In September 1678, Titus Oates made fanciful claims of a ‘Popish Plot’, accusing nearly 550 Jesuits of involvement in plots to assassinate the King; one of those accused being Edward Colman. As the claims were fabricated, no direct evidence of plans for regicide could be found, however searches of Edward Colman’s correspondence with the French Jesuit, Fr. Ferrier, confessor to Louis XIV, detailed fanciful schemes of obtaining the dissolution of the current Parliament, in the hope of replacing it with a new pro-French (and therefore pro-Catholic) one. In the wake of these revelations Edward was found guilty of treason and in November 1678 was hung, drawn and quartered. Now considered to be a Catholic martyr, Edward Colman was beatified by Pope Pius XI in 1929.

As DNW’s Antiquities specialist, Nigel Mills, explains: “The Colman seal ring is an excellent example of a high status ring of the period, of which there are only a very limited number surviving in this condition. Metal detectorists like Michelle have contributed vastly to our knowledge by finding treasures that would have otherwise been unknown to exist.” 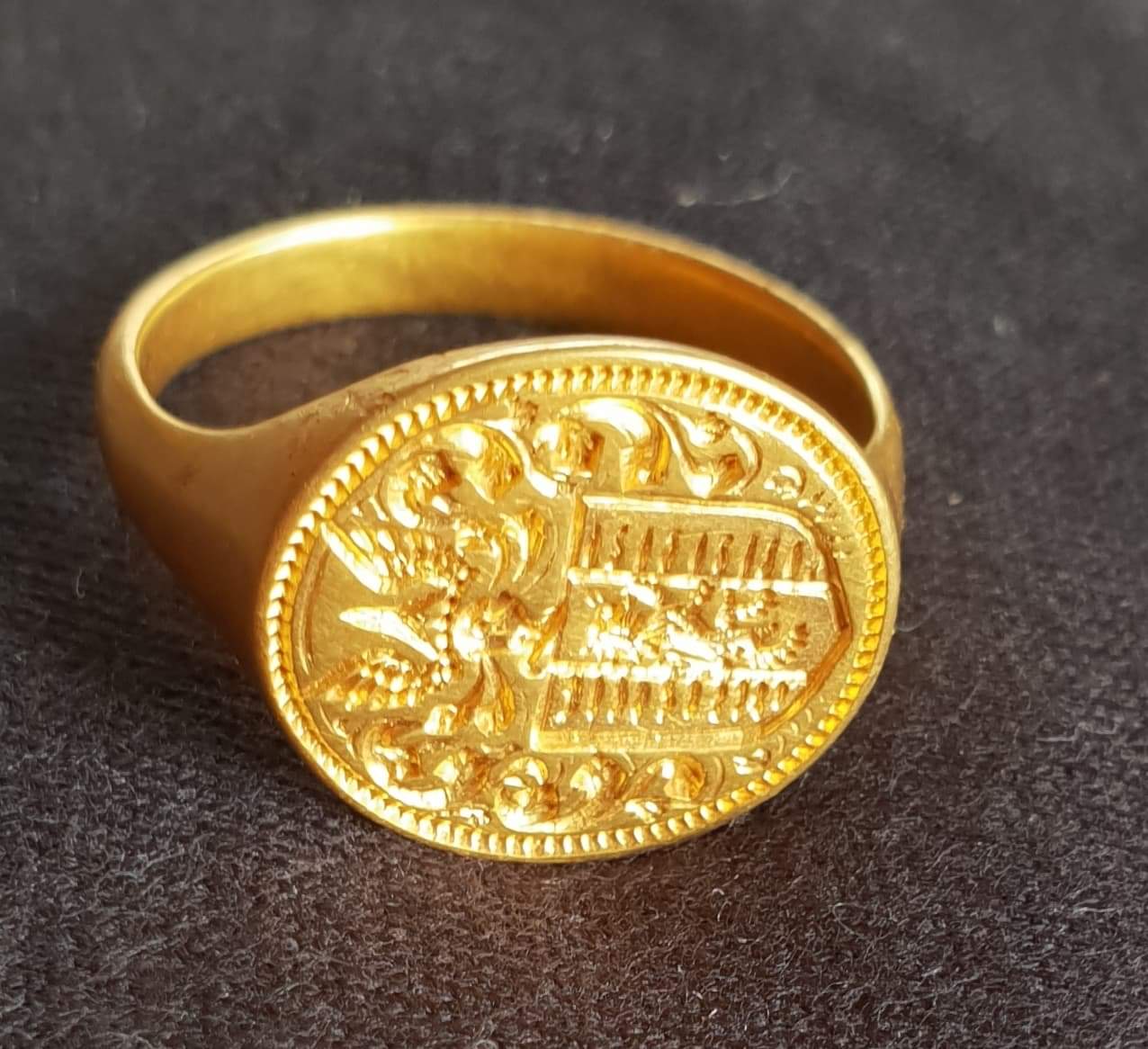 Michelle, who suffers from severe panic attacks and was unable to leave her house before she took up metal detecting, has found it helps her to overcome these fears and enjoy exploring the countryside. She said: “Uncovering the ring was an unforeseen event as myself and husband were detecting on a field with no particular history of finds in the area. We were enjoying the peace and relaxation of our wonderful hobby, finding the usual ring pulls, tractor pieces and miscellaneous metal objects. So when I unearthed the ring, which was close to the surface, I knew straight away that it was something special.
“It shone with a distinct bright yellow colour as I carefully lifted it out of the dark muddy hole, where it had waited for at least 350 years. My calm mind changed to one of excitement as I shouted Tony over, he was surprised to see the ring lying in the palm of my hand.”
Auction details
The ring will be offered at auction at Dix Noonan Webb's Jewellery, Watches and Objects of Vertu sale on 10 September 2019 at their auction rooms in London. Free online bidding is available. For details, visit the website.
QUICK LINK: Stewart queens guide