An 'insight' into 18th century hospitality in Sutherland - Scottish archaeology 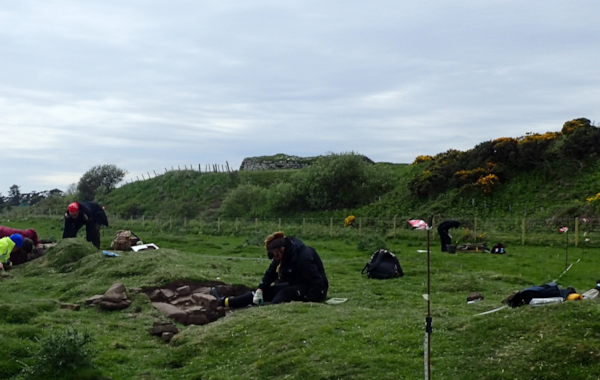 A community excavation near Brora in Sutherland in 2017 investigated the remains of an 18th-century drovers' inn at Wilkhouse, just north of Brora on the Sutherland coast.

A community excavation near Brora in Sutherland in 2017 investigated the remains of an 18th-century drovers' inn at Wilkhouse, just north of Brora on the Sutherland coast.

The investigations revealed evidence of unexpectedly high quality internal and external finishes on the buildings as well as evidence for wide-ranging trade links including with Anglesey and France, with coins dating from Victorian times back into the late 16th century.

This locale also boasts of Pictish and Viking remains from chance discoveries and lies in the shadow of the nearby Kintradwell Broch, a not so coincidental landmark that signposted the inn along the driving route.

The inn, which had a large cattle stance and a pond, closed around 1819 after the land was bought by the Sutherland Estates. This was no gastropub, but historic accounts detail the warm welcome once received at the inn from the host, Robert Gordon, and his “bustling, talkative wife” with customers heartily dining on cold meat, eggs, new cheese and milk.

The investigations revealed lime mortared walls externally with around half of the internal wall space displaying a fine mortar render. The inn was divided into at least two rooms with the rendered walls accommodating clientele around a fireplace. The floor in this room consisted of sand, a plentiful resource on what is a relict dune system raised slightly above the current shoreline. The floor was relatively clean and was likely replenished regularly.

Finds from around the entrance to Wilkhouse included dress-making pins, a bone shirt button and a small fragment of a bone comb, smaller and lighter items probably caught in the sweepings from the sand floor.

In contrast the second room of the building was fitted out with robust stone paved flooring and a double fireplace, the orthostats displaying evidence of extended use with scoring and bevelling where perhaps knives were sharpened for carving. One orthostat also appeared to have an inverted cross carved into it, a symbol often associated with witchcraft. The fireplaces contained remnants of the last fires lit here when the inn was intact in the early 19th century.

The neighbouring Gilchrist building, so called because of the surname of its last resident, was probably built a little later than Wilkhouse and was more slight in its construction with no rendering or mortar bonding. Many of the stones in the wall of the Gilchrist building were large hewn blocks reminiscent of those seen in the construction of the overlooking broch.

As well as the artefacts, the investigations uncovered the remains of earlier buildings, one underlying Wilkhouse itself and the other underlying an adjacent byre. These earlier buildings may account for the much earlier date of activity here in the late 16th century. A sample of the organic material from one of the earlier buildings will be radiocarbon dated to establish the date of this earlier phase.

The dig, commissioned by Dr Donald Adamson, Chairman of GUARD Archaeology Ltd, involved teaming up with Dr Nick Lindsay, the Clyne Heritage Society, and around 50 volunteers from the local and wider community. Students from Glasgow, Edinburgh and Germany, and four military personnel from the Army Personnel Recovery Unit also assisted the excavation. The dig was run over 12 consecutive days in May/June 2017 and also accommodated visits and participation from the Brora Primary School and the local Scout Group.

The Wilkhouse dig thus not only provided an 'innsight' into 18th century life, but it also enabled active community participation in the investigation of local history and archaeology, as well as providing training for archaeology students and a positive participatory experience for recovering servicemen.

The legacy of this project will be the continued local interest in this and other historical sites in the area through the display of a reconstruction model of the Wilkhouse site along with the artefacts recovered in the local Brora Heritage Centre.

Post-excavation analyses are ongoing and the results of this work will be published in Summer 2018 in Archaeology Reports Online (ARO), where it will be free to download as a pdf.

1: A selection of artefacts recovered from the Wilkhouse excavation © GUARD Archaeology Ltd