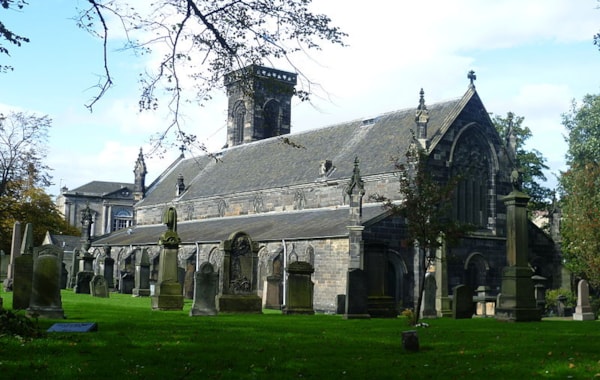 South Leith Parish Church, damaged in the Rough Wooing for the hand of Mary Queen of Scots

The latest extension to the Edinburgh tram route will see archaeologists remove around 200 human remains, some dating to the 14th century, if planned works get the go-ahead from councillors later this year.

The latest extension to the Edinburgh tram route will see archaeologists remove around 200 human remains, some dating to the 14th century, if planned works get the go-ahead from councillors later this year.

Rob Leech, project leader on the Edinburgh Tram project, told The Herald newspaper that a historic wall backing onto South Leith Parish Church (pictured) will be dismantled and later rebuilt if the extension to the tram route gets the go ahead later this year.

He said: 'In taking the wall down, we know that there are going to be additional exhumations required through that area.

“We also know there’s going to be significant archaeology through that area. John Lawson, the city archaeologist, said the area around Constitution Street is one of the most archaeologically rich in the city.

“You need to face into that and not shy away from it. So within the programme of works, we have allowed quite a significant period of time to deal not only with the listed wall – which needs to be rebuilt block by block – but also to deal with that archaeology. I believe these are bodies from many hundreds of years ago.”

John Lawson told History Scotland that the wall beside South Leith Parish Church stands close to a very old burial ground. Back in 2008, advance works ahead of the tramway uncovered the remains of just under 400 burials, most of which date to the late medieval period.

The listed wall was built in 1790 and if taken down, would be rebuilt with the memorial and cornerstones put back into their original sites. South Leith Parish Church dates back to 1483 and the site appears to hold burials which predate the church building, along with other human remains which date through to the mid 17th century.

John added that the creation of fortifications at Leith in the mid sixteenth century - around 1560 - meant that the boundary of the burial site was moved, before being moved again in 1790 when Constitution Street was extended, and so there has been quite a bit of disturbance around the area over the centuries.

If the present remains have to be moved, they will be 'carefully curated' and will eventually form part of the archaeological collections of Edinburgh City Council.

South Leith Parish Church - at the heart of history

South Leith Parish Church has an interesting past, and its location, close to Edinburgh and the port of Leith, has seen it at the centre of several pivotal events in Scottish history over the centuries. The original 15th-century building was a chapel dedicated to St Mary, and almost a century after its creation, in 1544, the building became a place of refuge for people displaced by the 'rough wooing' when King Henry VIII tried to force a marriage between his son Edward and the young Mary Queen of Scots.

The church, which has the arms of Mary of Guise in its entrance, was damaged by English artillery during a siege of Leith in 1560 and thirty years later, welcomed King James VI and his wife Anne of Denmark. South Leith Parish Church continues its role as a place of worship and welcomes thousands of visitors every year.

Members of the public, businesses and a wide range of stakeholders are now being invited to help shape plans for taking the tram route through to Newhaven, if the project is approved by Edinburgh City Council later in 2018. Read more about the consultation process.