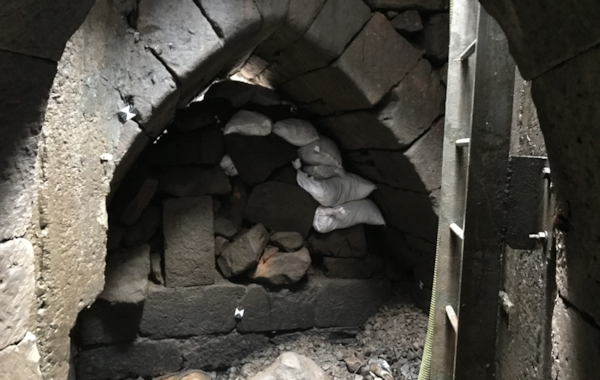 It was already known where Scotland’s finest and best-preserved medieval tunnel lies buried beneath Paisley town centre – but the centuries-old mystery of where it ended had never been solved until now….

A team of volunteers led by GUARD archaeologists spent the summer excavating Paisley Abbey’s drain and found a well-preserved 14th-century stone archway marking the exact point the drain and its contents once flowed into the River Cart. They established the tunnel – believed to be around 100m long – ends around 3m from the banks of the present-day river, which would have been wider and shallower at the time the drain was built.

Trench 1 was located in the middle section of the medieval drain at a point where the medieval pointed arch of the drain meets a late 19th-century concrete repair.  Here the team investigated through a modern tarmac surface which covered 18th- and 19th-century deposits that contained several large fragment of glass wine bottles including one with the stamp of the Earls of Dundonald, who owned the land around the Abbey at this time.

Below this were several garden type occupation layers that contained a number of artefacts including clay tobacco pipes with a distinctive late 17th-century shape and style. The structural stones that formed the arch of the drain were uncovered along with the slab of concrete that marked the start of the repaired section.

Surprisingly, it appears that the stones forming the roof were only one course thick and quite crudely shaped unlike the fine stonework visible on the inside of the drain. It may be that some of the structural stones were removed to make space to get in and pour the concrete.

Trench 2, was an extension to an evaluation trench that was excavated in 2009 to investigate the point where the medieval drain joins the River Cart. Here the team were able to reveal the remains of the medieval drain, uncovering its end which comprised a pointed arch with the facing stones of the exterior wall which continued on both sides of the drain. The stones forming the face of the wall show that this section of the wall was built to be visible and may have formed the precinct or boundary wall of the monastery.

The interior of the drain was not investigated but several large blocks of masonry including architectural stones were revealed in the upper fill. These stones may have come from buildings that were built over the drain or the immediate vicinity.

And while the trenches have now been covered up again, the discovery could help lead to a more permanent visitor attraction being built in the future, allowing people to go inside the drain.

GUARD Archaeology excavation leader Bob Will said: ‘We found more than I was expecting and it is really exciting. We found the end of the drain and what was the boundary wall of the monastery. The river was wider and shallower in those days – much more than in the last couple of hundred years, as the walls now surrounding it are artificial. The main parts of the drain date back to the mid-14th century and are incredibly well preserved.’

QUICK LINK: 19 archaeology projects you can take part in this summer