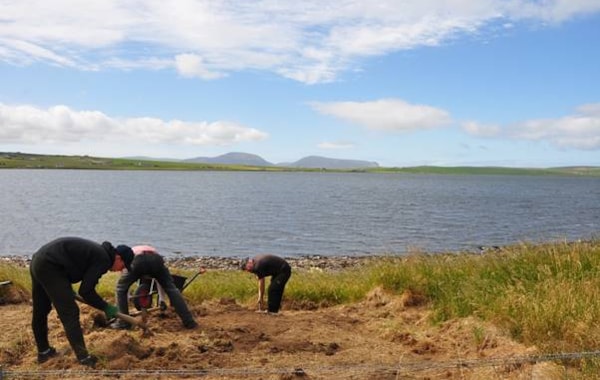 The 'exceptional' discovery of two stone axes at Ness of Brodgar have given archaeologists a glimpse into the lives of the people who constructed the stone complex at Orkney 5,000 years ago.

The 'exceptional' discovery of two stone axes at Ness of Brodgar have given archaeologists a glimpse into the lives of the people who constructed the stone complex at Orkney 5,000 years ago.

The dig, which is one of the largest and most important Neolithic excavations in Northern Europe, is continuing to reveal an increasingly large complex of monumental Neolithic structures together with ‘artwork’, over 30,000 pieces of pottery, large assemblages of bones and stone tools – including over 30 unique stone axes.

What is the Ness of Brodgar?

The Ness of Brodgar is an archaeological excavation covering an area of 2.5 hectares in the Heart of Neolithic Orkney World Heritage Site, in Scotland. It has revealed a well-preserved and sophisticated complex of monumental stone buildings, enclosed by walls up to six metres thick.

Built and occupied by people over 5,000 years ago, the Ness has produced decorated and painted stonework unlike any other site in the UK.

Last week archaeologists from the University of the Highlands and Islands Archaeology Institute and the Ness of Brodgar Trust unearthed two polished stone axes in quick succession.

The first axe was discovered in the closing moments of Thursday [2 August 2018] in the new trench on the shore of Loch of Stenness. The expertly-worked and polished object was the largest axe so far discovered on site and had been heavily used and damaged at the cutting edge.

Nick Card, Site Director, said, “It is nice to find pristine examples of stone axes, but the damage on this one tells us a little bit more about the history of this particular axe. The fact that the cutting edge had been heavily damaged suggests that it was a working tool rather than a ceremonial object. We know that the buildings in the complex were roofed by stone slabs so this axe was perhaps used to cut and fashion the timber joists that held up the heavy roof.

“The second axe was discovered by one of our students, Therese McCormick, from Australia who’s volunteered at the Ness of Brodgar. This stone axe astonished the archaeologists on site through its sheer quality of workmanship. The Gneiss stone had been chosen so that the natural coloured banding was reflected in the shape of the item and then expertly worked and polished to create an object of beauty.

“This axe again tells us a little more about the life of the Neolithic people who built this place. There is, in common with the large axe discovered earlier, a great deal of edge damage suggesting that this axe was used extensively as a working tool, but interestingly one of the edges has been re-worked to create a new edge and also both sides are covered in peck marks suggesting that it was also re-used perhaps as a mini anvil.

“This axe, in common with many of the axes found on site, was also placed in a special position within one of the structures opposite the entrance that was aligned east-west to catch the equinox sunrise and in line with Maeshowe. These polished stone axes unearthed at the Ness of Brodgar were clearly multifunctional tools that were not only ‘tools of the trade’ but were also perhaps symbols of power.”