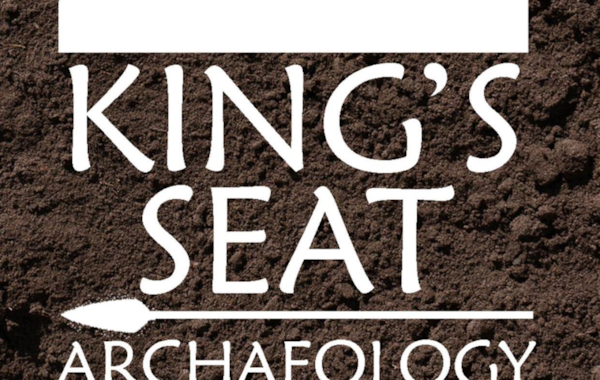 An impressive assemblage of early historic metalworking artefacts and possible slingshot ammunition have been discovered during excavations at the hillfort of King's Seat, above Dunkeld.

An impressive assemblage of early historic metalworking artefacts and possible slingshot ammunition have been discovered during excavations at the hillfort of King's Seat, above Dunkeld.

In September 2018, archaeologists and volunteers will be returning to King’s Seat, Dunkeld to try and unlock more of its secrets. The hillfort features as the centrepiece in Perth and Kinross Archaeology Month, the regional programme of the annual Scottish Archaeology Month.

Not only will there be the two-week excavation to sign-up and take part in, but programme organisers Perth and Kinross Heritage Trust, and their King’s Seat project partners, will be hosting an exciting living history event in Dunkeld with ancient technology demonstrations and hands-on activities for all the family. Guided walks will also be on offer taking groups up to the hillfort to witness the excavations and hear more about the exciting early historic metalworking evidence that’s being uncovered.

The King’s Seat Hillfort Archaeology Project offers volunteers from the local and wider community, including local primary and secondary schools, the opportunity to help professional archaeologists uncover the history of this enigmatic hill top site whilst receiving training in archaeological skills.

The project is a partnership between Perth and Kinross Heritage Trust (PKHT) and the Dunkeld and Birnam Historical Society (DBHS) supported by professional archaeological contractors AOC Archaeology Ltd and funded by Heritage Lottery, the Gannochy Trust, and Scottish & Southern Electric’s Griffin and Calliacher Windfarm Community Fund.

King’s Seat hillfort is located to the north of Dunkeld on a major bend in the river Tay and has long been inaccessible due to rhododendron growth over the summit. However, thanks to a gargantuan effort from DBHS volunteers in 2016, the summit of King’s Seat is now free from vegetation, meaning that the fort can be visited, appreciated and excavated.

The fort’s defences surround a central ‘citadel’ enclosure measuring about 35m x 25m, situated at the summit of the hill with a cascading series of ramparts below that enclose a flight of lower terraces.

The first season of excavations at King’s Seat took place in September with 39 volunteers and 35 primary and secondary school pupils climbing the steep slopes of the hill to help with the dig over the two week duration. Four trenches were opened in 2017: Trench 1 – located over a series of terrace steps down the west side of the summit; Trench 2 – over a large mound situated at the highest point of the hill adjacent to a large glacial erratic boulder; Trench 3 – positioned over what looked to be the end of the summit rampart next to a possible entranceway; and Trench 4 – looking at the flat area enclosed by the rampart surrounding the summit of the hill.

The excavations revealed that the rhododendron growth on the summit of the hill and remodelling of some of the lower banks by the Atholl Estate in the Victorian period has had a significant impact on the condition of the shallow archaeological deposits. Despite these challenges there have been some very important and interesting discoveries:

When asked about the importance of the findings at King’s Seat, archaeologist Andy Heald from AOC Archaeology Ltd responded “Considered together, the material culture recovered from King’s Seat is hugely important and clearly indicates in situ activity on the site. While it seems obvious to the modern archaeologist that some sort of elite would have controlled, if not occupied hillfort sites, it is still rare for such sites to produce such a wealth of evidence.

“The fact that evidence for metal working was identified in every trench certainly suggests that the site was hugely important in the production of prestige metalwork and, similarly to important high status early historic hillforts such as Dunadd and Dundurn, may have been a centre of production. Dundurn, Dunadd and King’s Seat all share similar characteristics including topographic location, working and utilisation of exposed bedrock outcrops.”

For more information about Perth and Kinross Archaeology Month and programme listings visit the website or check out Archaeology Scotland. Brochures will be available from local museums and libraries from August. If you would like to find out more about the King’s Seat Hillfort Archaeology Project, the discoveries from the first season of digging, the placename survey that’s been completed or volunteer for the 2018 dig then log on to the project page.