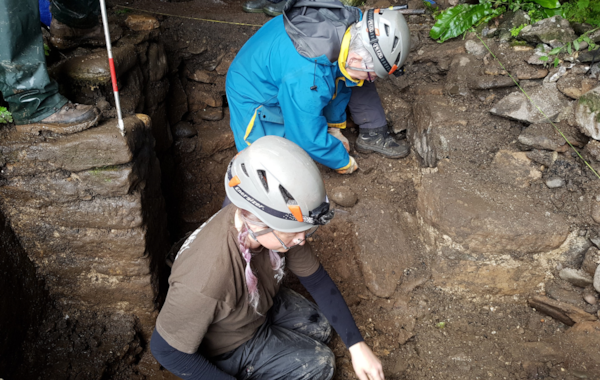 Archaeologists working for the National Trust for Scotland have uncovered the remains of a medieval doorway leading into the caves underneath Culzean Castle on the Ayrshire coast.

Archaeologists working for the National Trust for Scotland have uncovered the remains of a medieval doorway leading into the caves underneath Culzean Castle on the Ayrshire coast.

The team of volunteer archaeologists spent last week helping investigate the caves as part of one of the conservation charity’s Thistle Camp working holiday. In addition to finding the doorway, results have been obtained that indicate the caves were occupied in the Iron Age.

Derek Alexander, Head of Archaeological Services for the Trust, said: “We are really excited about this discovery and the results of the excavation so far.

“We knew there was a wall and doorway at the mouth of the Castle Cave but there was nothing at the entrance of the Stables Cave. A couple of stones on the surface suggested there might have been a wall.

“Imagine our surprise when we found two sides of a doorway surviving up to 8 courses high buried to a depth of about one metre. The doorway is quite wide, measuring 1.1m across and could have been secured with a draw bar.

“We have also just received a radiocarbon date from a sample taken last year which shows that caves were occupied in the Iron Age. The sample of charcoal from the lowest midden deposit in upper chamber in Castle Caves was submitted to the SUERC laboratory and produced a date of 135 -325 AD. This is similar to a date from the Gazebo Court on top of the cliff above the cave but is the earliest dated evidence from the caves.

“Uncovering new finds like this helps us to inspire others to support us in our work to ensure Scotland’s heritage is valued by everyone and protected now and for future generations.”

The caves below Culzean Castle

Culzean Castle and Country Park, on the coast near Ayr, is one of the most popular tourist attractions in Scotland, yet few visitors realise that the famous castle was built over a warren of caves. There are two sets - one is below the Stables which is open to the public. The other is below the castle and has a stone frontage and barred entrances.

Following recent archaeological investigations into the caves, the Trust is keen to improve access as part of the visitor experience at Culzean.

Ian Cornforth, Culzean Head Ranger said: “These results will help inform our interpretation of the Culzean and the human activity in the caves. There are so many stories to tell here and share with our visitors.”

Derek Alexander, Head of Archaeology added: “The stone walling that defends both sets of caves belongs to the medieval castle, probably dating to the 15th or 16th century. They were used as cellars for storage before Robert Adam converted the castle to the picturesque mansion in the late 18th century. There are many tales associated with the caves that include ghosts, smugglers and hiding fugitives.”