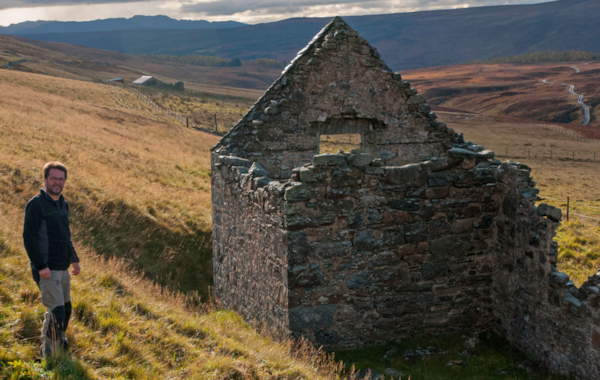 Stephen Worth, University of the Highlands & Islands

A Moray student is to undertake new research into the fate of farms which were set up on marginal land after the Highland Clearances.

A Moray student is to undertake new research into the fate of farms which were set up on marginal land after the Highland Clearances.

Stephen Worth from Findhorn is the first University of the Highlands and Islands student to be awarded a Carnegie-Caledonian PhD scholarship and is one of only 19 recipients in Scotland this year. Administered by the Carnegie Trust, the award will help to cover Stephen’s fees and research expenses for three years.

Stephen is using the scholarship to undertake ground-breaking research into the fate of farms which were set up on marginal land after the Highland Clearances.

The use of marginal land

Stephen said: “Farming practices in the north of Scotland underwent major change between the mid-18th and mid-19th centuries. Advances in science and technology as well as changes in ideologies led to the demise of communal agricultural systems managed by townships. Many people established their own farms in marginal, upland areas which had previously only been used for grazing in the summer months.

“However, a large number of these farms failed and now lie in ruins. Previous research has mostly been documentary, but I hope to complement this by taking an interdisciplinary approach which also uses archaeological analysis. I will combine information from archival material such as estate records and historical maps along with archaeological tests such as soil sampling and geophysical survey to gain a wider understanding of why these farms proved to be unsustainable.”

Speaking about being awarded a Carnegie-Caledonian PhD scholarship, he said: “It has taken some time to sink in just how fortunate I have been to receive this scholarship. The Carnegie Trust only award a limited number of scholarships each year to students from all the universities in Scotland. I feel very honoured to have been selected from all the potential candidates. I was unaware that I am the first student from the University of the Highlands and Islands to achieved this and realise that, firstly, I must thank all the lecturers and staff who have supported me throughout and, secondly, seize this opportunity to undertake this research and fulfil a lifelong dream.”

For more information about history and archaeology courses at the University of the Highlands and Islands, visit their website.