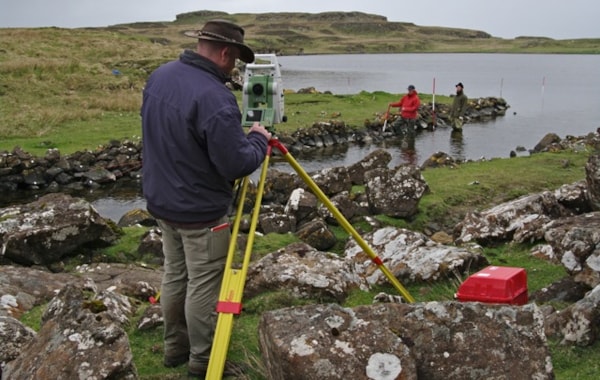 A stone-lined canal on the Isle of Skye which was possibly built in the Viking era has been granted Historic Monument status by Historic Environment Scotland.

A stone-lined canal on the Isle of Skye which was possibly built in the Viking era has been granted Historic Monument status by Historic Environment Scotland.

The canal, which links a small inland loch to the sea at the end of the uninhabited peninsula of Rubh' an Dùnain in the foothills of The Cuillins, is described by archaeologists as “a rare and significant survival of a harbour complex associated with West Highland and Hebridean galley tradition.” It is accessible only by a 13km round trip on foot.

The peninsula overlooking the Sound of Soay, is the hereditary homeland of the Clan MacAskill once known as coast watchers, galley masters and bodyguards to the Macleods of Skye. The ancient settlement, which historians and scientists believe may have been occupied for millennia, was abandoned during The Clearances in the mid-1800s.

The MacAskills of Rubh' an Dunain Society, which in 2015 launched the Skye's Hidden Heritage website, and which helped to fund a small part of the scientific research, today welcomed the Historic Environment Scotland move. Website editor Gordon Mack said: “This is a decision which we applaud. It will afford this unique location official protection and add to our campaign to repopulate the area with a virtual online community.”

The historic monument designation applies to a 117m stone-lined canal, two substantial boat docks and former “noosts” or boat shelters, loch-side quays and the bed of Loch na h-Airde itself. A boat timber found in the margins of the shallow brackish loch in 2000 has been carbon dated to around 1100 AD.

The remote location has preserved the remains in good condition and archaeologists are excited about the possibility of further discoveries. A spokesperson for Historic Environment said: “The complex is particularly notable for its impressive survival of field remains, the possible relationship to an Iron Age dun, the rock-cut channel and the potential for further Norse and medieval boat remains to survive in the loch.

“The scale of the docks, noosts and the presence of the canal and loch quays demonstrates that the site was a significant anchorage for the western seaboard. Given its sheltered and important strategic location, it is possible that the loch was used to shelter and overwinter boats, or that the site was a staging location. It may also have been used to repair or even construct boats.”