One of the first pots to be discovered, an Unstan Bowl from Loch Arnish (photo: Chris Murray)

A team of scientists, led by the University of Bristol, has uncovered new insights into the diet of people living in Neolithic Britain and found evidence that cereals, including wheat, were cooked in pots.

Using chemical analysis of ancient, and incredibly well-preserved pottery found in the waters surrounding small artificial islands called crannogs in Scotland, the team were able to discern that cereals were cooked in pots and mixed with dairy products and occasionally meat, probably to create early forms of gruel and stew. They also discovered that the people visiting these crannogs used smaller pots to cook cereals with milk and larger pots for meat-based dishes.

The findings are reported today in the journal Nature Communications.

Cereal cultivation in Britain dates back to around 4000 BCE was probably introduced by migrant farmers from continental Europe. This is evidenced by some, often sparse and sporadic, recovery of preserved cereal grains and other debris found at Neolithic sites.

At this time pottery was also introduced into Britain and there is widespread evidence for domesticated products like milk products in molecular lipid fingerprints extracted from the fabric of these pots. However, with exception for millet, it has not yet been possible to detect molecular traces of accompanying cereals in these lipid signatures, although these went on to become a major staple that dominates the global subsistence economy today.

Previously published analysis of Roman pottery from Vindolanda [Hadrian’s Wall] demonstrated that specific lipid markers for cereals can survive absorbed in archaeological pottery preserved in waterlogged conditions and be detectable through a high-sensitivity approach but, importantly this was ‘only’ 2,000 years old and from contexts where cereals were well-known to have been present. The new findings reported now show that cereal biomarkers can be preserved for thousands of years longer under favourable conditions.

Another fascinating element of this research was the fact that many of the pots analysed were intact and decorated which could suggest they may have had some sort of ceremonial purpose. Since the actual function of the crannogs themselves is also not fully understood yet (with some being far too small for permanent occupation) the research provides new insights into possible ways these constructions were used.

During analysis, cereal biomarkers were widely detected (one third of pots), providing the earliest biomolecular evidence for cereals in absorbed pottery residues in this region.

The findings indicate that wheat was being cooked in pots, despite the fact that the limited evidence from charred plant parts in this region of Atlantic Scotland points mainly to barley. This could be because wheat is under-represented in charred plant remains as it can be prepared differently (e.g., boiled as part of stews), so not as regularly charred or because of more unusual cooking practices. 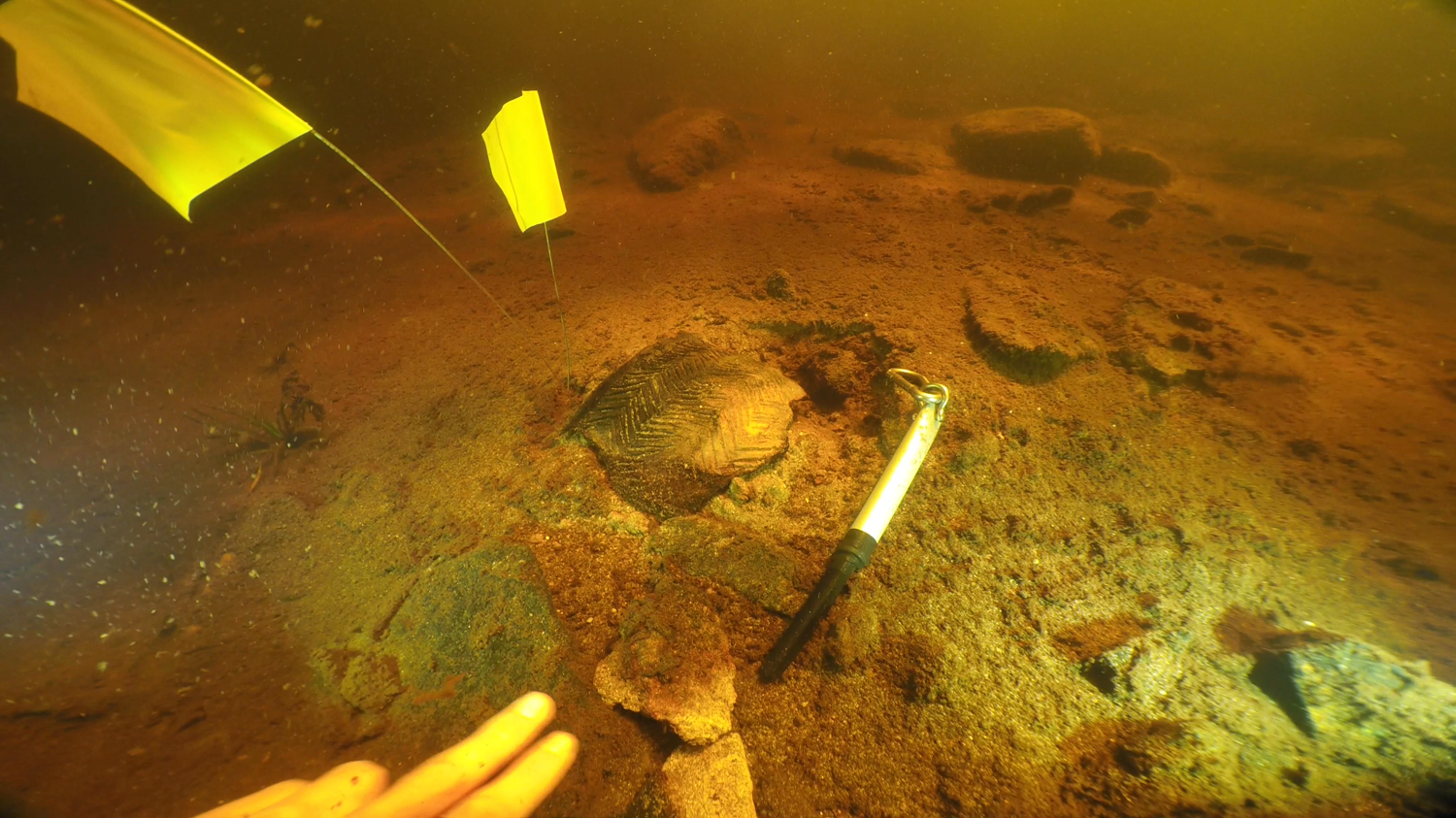 A substantial sherd of Early Neolithic pottery, as found on the loch bed at Loch Bhogastail (photo: Dan Pascoe)

Cereal markers were strongly associated with lipid residues for dairy products in pots, suggesting they may have been cooked together as a milk-based gruel.

The research was led by Dr Simon Hammann* and Dr Lucy Cramp at the University of Bristol’s Department of Anthropology and Archaeology.

Dr Hammann said: “It’s very exciting to see that cereal biomarkers in pots can actually survive under favourable conditions in samples from the time when cereals (and pottery) were introduced in Britain. Our lipid-based molecular method can complement archaeobotanical methods to investigate the introduction and spread of cereal agriculture.”

Dr Cramp added: “This research gives us a window into the culinary traditions of early farmers living at the northwestern edge of Europe, whose lifeways are little understood. It gives us the first glimpse of the sorts of practices that were associated with these enigmatic islet locations.”

Crannog sites in the Outer Hebrides are currently the focus of the four-year Arts and Humanities Research Council-funded ‘Islands of Stone’ project, directed by two of the papers’ authors (Duncan Garrow from the University of Reading and Fraser Sturt from the University of Southampton) along with Angela Gannon, Historic Environment Scotland.

Professor Garrow said: “This research, undertaken by our colleagues at the University of Bristol, has hugely improved our knowledge of these sites in many exciting ways. We very much look forward to developing this collaborative research going forwards.”

The next stage of the research at the University of Bristol is an exploration of the relationship between these islets and other Neolithic occupation sites in the Hebridean region and beyond as well as more extensive comparative study of the use of different vessel forms through surviving lipid residues. These questions form part of an on-going Arts and Humanities Research Council/South-West and Wales Doctoral Training Partnership-funded PhD studentship.

* Dr Hammann is now based at the Friedrich-Alexander-Universität Erlangen-Nürnberg in Erlangen, Germany.