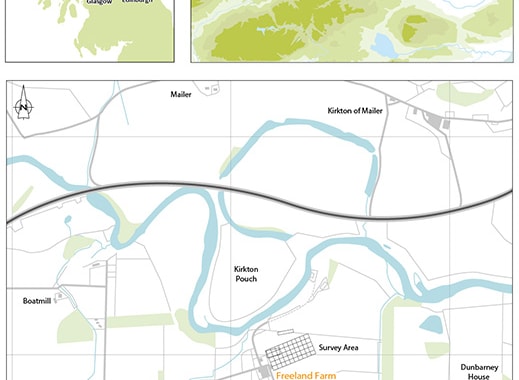 Archaeological findings that relate to a previously unknown Mesolithic site just south of Perth have just been published.

Archaeological findings that relate to a previously unknown Mesolithic site just south of Perth have just been published.

Mesolithic sites have been found throughout Scotland, but some Scottish regions have only yielded a small number of hunter-gatherer sites, such as the area around the River Tay estuary. Until now, the only site to have shed light upon the Tay estuary during early prehistory is the Mesolithic settlement of Morton, near where the estuary meets the North Sea.

During the Early Settlers Project undertaken in 2014-2017, another late Mesolithic site at Freeland Farm was discovered, in the inner part of the estuary just south of Perth. Analysis of the findings, which demonstrate innovative exploitation of local resources by one of the earliest groups of people to inhabit Scotland, has just been published in Archaeology Reports Online.

Evidence for a mobile Mesolithic population

The project investigated large parts of the lower-lying fields of the Tay estuary, specifically targeting the areas affected by shoreline displacement during the Mesolithic period (c. 9800-4000 BC) as identified in a preliminary study by Dundee University. Within this part of the estuary (the present flood plains), the team identified areas which were likely candidates for the activities (hunting, fishing and gathering) of a mobile Mesolithic population.

‘A number of fields around the Tay estuary were investigated by volunteers through fieldwalking,’ said co-Author Sophie Nicol. ‘Of these the fields at Freeland Farm yielded the numerically largest lithic assemblage (707 pieces) and offered the greatest potential to shed light on the late Mesolithic of the Tay estuary.’

The Mesolithic community here at the site of Freeland Farm predominantly exploited local carnelian stone, but it is uncertain whether this was simply a matter of local availability or whether this choice was also a matter of non-functional reasoning.

The use of carnelian

The finds from Freeland Farm mainly comprise of broadblades, microblades, scrapers and burins, which were used for hunting, skinning and processing animal meat and skins for food, clothes, bedding and tents. The lithic finds were distributed across the site in a linear pattern that probably reflects the location of the Mesolithic settlement on the shoreline, which at the time is thought to have been 12m OD, some 3 m below the site.

The distribution of artefacts is fairly dense across most of the site, suggesting that this entire area may have been visited and revisited over a long period, creating a dense palimpsest of a large number of individual small settlements and knapping floors. Research has shown that scatters left by individual family groups may be as small as a few metres across but the lithic scatter at Freeland Farm is much larger.

The Early Settlers Project formed part of the Tay Landscape Partnership and in particular its community participation programme, which aimed to get local people working together to shed new light on the area’s early prehistory through fieldwalking. The Tay Landscape Partnership was a Heritage Lottery funded partnership led by Perth and Kinross Heritage Trust with various additional funders and supporters (see www.TayLP.org for more details). ARO36: Freeland Farm, Perth and Kinross – a mainly late Mesolithic carnelian assemblage from the Lower Strathearn by Sophie Nicol and Torben Bjarke Ballin is freely available to download from the ARO website - Archaeology Reports Online.