Norse hall discovered during excavations at island of Rousay, Orkney 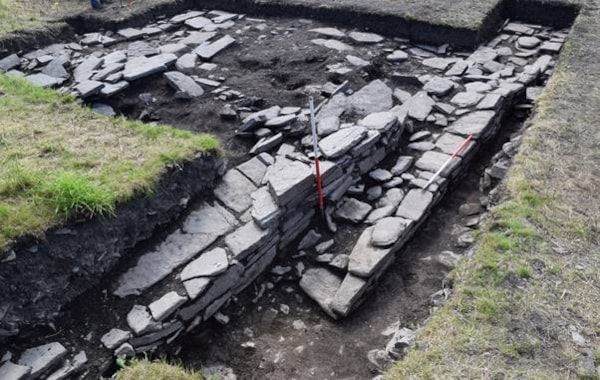 A large Norse hall has been discovered during excavations at Skaill Farmstead, on the island of Rousay, Orkney. The hall probably dates to the 10th to 12th centuries AD and was discovered below a more recent farmstead.

A large Norse hall has been discovered during excavations at Skaill Farmstead, on the island of Rousay, Orkney. The hall probably dates to the 10th to 12th centuries AD and was discovered below a more recent farmstead.

A team of archaeologists from the University of the Highlands and Islands Archaeology Institute, Rousay residents and students have been digging at the site for a number of years, investigating the later stages of the farm complex and its middens (waste heaps), with a particular focus on past diet, farming and fishing practices.

Project co-director Dr Ingrid Mainland said: “We have recovered a millenia of middens which will allow us an unparalleled opportunity to look at changing dietary traditions, farming and fishing practices from the Norse period up until the 19th century.”

What are the finds?

The main find this summer, was that walls extending from below the extensive settlement mound have been confirmed as a large Norse building, which is likely to be the hall. Substantial 1m wide stone walls were found 5.5m apart with internal features such as stone benches along either side. The building appears to be in excess of 13m long. The hall is oriented down the slope towards the sea. Finds have included steatite (soap stone from Shetland), pottery and a bone spindle whorl. A fragment of a Norse bone comb was also found.

Although only partly uncovered at this stage, the Skaill hall has parallels with other Norse halls excavated in Orkney, such as Snusgar, and elsewhere in Scotland. The find provides tantalising evidence for the earliest phases of inhabitation on this farm and settlement mound which may well have been inhabited for over 1,000 years. It provides another piece to the 5,000 year jigsaw along this archaeology rich stretch of coast at Westness on Rousay – the ‘Egypt of the north’.

The excavation is part of the Landscapes of Change – Archaeologies of the Rousay Clearances and Westness Estate project which aims to explore the farmstead at Skaill from the Norse period to its abandonment in the 19th century. The present farm at Skaill dates to the 18-19th centuries and was part of the Rousay clearances during the mid-19th century; however the name Skaill suggests the site was home to a Norse hall or drinking hall, and was a high status site.

Westness is mentioned in Orkneyinga saga as the home of Sigurd, a powerful chieftain, so it was always likely that a Norse settlement was located somewhere at Skaill. Earlier structures have been found below the present farm during previous seasons, and this season explored more of the Norse phases of the site.

Project co-director Dan Lee said “The exciting news this season is that we have now found the hall at Skaill, as the place name suggests. You never know, but perhaps Earl Sigurd himself sat on one of the stone benches inside the hall and drank a flagon of ale!”

The project is led by Dr Ingrid Mainland, Dr Jen Harland, Dr Sarah Jane Gibbon and Dan Lee from the UHI Archaeology Institute, based at Orkney College. Funding is from the Orkney Islands Council Archaeology Fund and the Rousay, Egilsay and Wyre Development Trust. Many thanks to landowners Russell and Kathryn Marwick.